We’ve got bad news for those of you crushing on Stranger Things star Joe Keery– he’s taken.

That’s right, Keery, 25, is dating actress Maika Monroe, 24, who fans may recognize from the 2014 hit horror film, It Follows.

Now that Stranger Things is in its second season and its actors are getting older, fans are growing increasingly curious about the personal lives of its stars. Viewers fell in love with Steve this season, who rounds out a love triangle that also includes Nancy and Jonathan– coincidentally, Natalia Dyer and Charlie Heaton have been rumored to be dating for almost a year now.

So what’s the deal with Joe and Maika? How long have they been an item? Read on to find out what we know.

Actress Maika Monroe poses for a portrait during the “Hot Summer Nights” premiere 2017 SXSW Conference and Festivals 13, 2017 in Austin, Texas.

In March, Deadline announced that Monroe would star in a romantic drama/offbeat comedy alongside Jeremy Allen White (“Shameless”).

The film will center on White and Monroe’s characters, who develop a close friendship after one of them is diagnosed with a life-changing illness. Keery will play Chris, whose role is unclear at this point. The flick will also star Marisa Tomei.

Shotgun was written and directed by Hannah Marks and Joey Power, and produced by Jordan Yale Levine, Jordan Beckerman, Michael J. Rothstein and Ash Christian. In a statement to the Hollywood Reporter, Marks recently said, “Maika and Jeremy could not be more perfectly suited to bring the complex and challenging characters of Mia and Elliot to life.” Power added on, “We are big fans of their work and are incredibly grateful and excited to have them on board.”

3. They Were Seen Spending Time Together on July 4

It seems the two are hoping to keep their relationship out of the spotlight– neither has posted a picture of the other on their Instagram.
d
Monroe’s breakout year came in 2014: she starred in The Guest and It Follows. She also starred in Fox’s Independence Day: Resurgence and The 5th Wave. When she isn’t busy acting, Monroe is kiteboarding. In fact, up until age 17, she lived in the Dominican Republic as a top-ranked professional kiteboarder.

In an interview with the Hollywood Reporter last year, Monroe was asked how kiteboarding has helped her as an actress. She said, “It taught me determination, working hard for something. There’s lots of discipline. I enjoy roles that are quite physical. That was really fun with Independence Day, being a fighter pilot, kicking some ass.”

Joe brought Maika to the Stranger Things season 2 premiere on October 26. Monroe planted a kiss on Keery’s face on the red carpet, and both seemed absolutely smitten with one another.

The event marked their first red carpet appearance together.

4. Monroe Was Rumored to Be Dating Liam Hemsworth in 2015

In 2015, Monroe was rumored to be dating her Independence Day 2 costar Liam Hemsworth.

According to an article in US Magazine, a source said that the two were seen canoodling at a party thrown by director Roland Emmerich. The source reportedly told US Magazine, “His hand was on her butt as she was grinding into him and they were making out at the bar… Liam was draped all over her. It was so PDA and in-your-face!”

Another source told the outlet, “They’re not official. But their chemistry is ridiculous!”

5. Keery First Auditioned for the Role of Jonathan

Along with being an actor, Keery is a musician. He graduated from DePaul University, and went on to appear in small roles on Empire and Chicago Fire.

Keery first auditioned for the role of Jonathan on Stranger Things. Later on, he was asked to tape for the role of Steve– his role was bumped from a recurring to a series regular for season 2.

Describing the process of being cast with Vulture recently, Keery said:

It’s kind of funny. I sent a tape in, didn’t really hear anything for a while, and then two months later they were like, “They want you to tape for this other role.” I taped for Jonathan originally and then taped for Steve and then Skyped the brothers and then waited two weeks and then found out that I got it. I was waiting tables at the time and then found out that I got it and had to go back inside and wait more tables. So it was pretty bizarre, pretty cool. Definitely a life-changing moment. Obviously you don’t really know what the show is or what it’ll be, but just to have any sort of steady job. 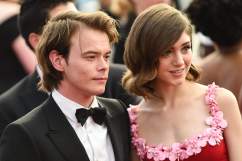