Youtube Lyric Ross as Deja on This Is Us.

Lyric Ross has impressed This Is Us fans across the country with her raw portrayal of Deja, a 12-year-old foster child taken in by Randall and Beth.

The role is a demanding one, but the 14-year-old has proved she’s got the acting chops to deliver; as the season progresses, fans are excited to find out what lies ahead for Deja.

Read on to learn more about Lyric Ross.

1. Deja Is Her First Recurring Role on a Television Series

#News "Straight Up Hollywood: It's girl power with Lyric Ross of 'This Is Us,' Grace VanderWaal" via #USAToday | https://t.co/P8pl8La5vv pic.twitter.com/3X9LQvBBp7

Before booking the role of Deja, Ross had just four credits on her IMDB page. She appeared in one episode of Chicago Fire and one episode of Sirens. Her most recent project, Canal Street, is currently in post-production.

According to USA Today, Ross has wanted to act since she was a toddler.

2. Sterling K. Brown Has Commented on Her Impressive Acting Skills

Speaking to USA Today via email, Sterling K. Brown commented on Deja’s impressive acting skills. “She’s a baby, and to me, it feels like she’s been doing this for years. She is so present, responsive and truthful.”

Susan Kelechi Watson, who plays Beth, agrees with Brown, saying, “Lyric is a beautiful young girl. Her personality is so loving, warm and very fresh. She’s seeing things for the first time.”

As for Lyric, herself, the actress says she’s thrilled to be working opposite such talented actors. “Brown is amazing. He is an Emmy award winner. I was going crazy. … (Watson) is funny. She’s super cool to work with.”

Sterling K. Brown, who plays Randall, Deja’s foster father, is known for playing Christopher Darden in The People vs. OJ Simpson: American Crime Story, for which he won the Primetime Emmy for Outstanding Supporting Actor in a Limited Series or Movie. Earlier this year, he won his second Emmy for his portrayal of Randall on This Is Us.

Apart from This Is Us, Susan Kelechi Watson is known for her work on Louie. She has also appeared on NCIS, The Following, and The Blacklist.

3. She Cut Her Hair for the Role

Lyric had to cut her hair for the role of Deja. She did so on screen, and the experience was not an easy one.

The cut was necessary for her character’s story to develop. Last week on This Is Us, Beth helped Deja wash and braid her hair for the first time in ages, and discovered that Deja had bald spots on her head– a symptom of a type of hair loss called alopecia. When Deja found out that Beth had told Randall her secret, she chopped her hair off in anger.

Watson spoke to USA Today about Lyric’s bravery when it came to cutting her hair and performing that scene. “This is a teenage girl being asked to cut her hair off in a matter of, like, 15 minutes. That is a huge deal, especially as a young person (and) as a black woman. There’s so much about our hair that is part of what defines us… There were tears and it was hard and her mother was standing by. That wasn’t easy. She’s a champ.”

4. She Is from Homewood, Illinois

Lyric hails from Homewood, Illinois. The actress tells USA Today that when she isn’t busy acting, she likes to listen to music, swim, and fish.

As for school, she says it has been an adjustment with her classmates. “[They] think I’m famous now,” she tells the outlet.

5. She Doesn’t Appear to Be on Any Form of Social Media

What a great cast.. Deja is played by a phenomenal actress!

As she’s still young, perhaps it isn’t that surprising Lyric isn’t on any form of social media.

And while she may not be active on Twitter, she’d be happy to know that she’s got a ton of fans on the social media platform. One Twitter user recently wrote, “Deja is an amazing actress. I see her on the big screen soon. You go Deja.” Another fan wrote, “Sooooo Lyric Ross is a wonderful little actress, she does so much with Deja while saying so little.” 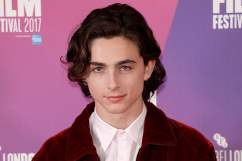 Read More
Celebrities, This Is Us
Lyric Ross stars as Déjà on NBC's This Is Us.