Getty The host of 'WTF with Marc Maron' Marc Maron talked about his friend Louis C.K. at the start of Monday's episode

When The New York Times‘ reported on Thursday that comedian Louis C.K. had been accused by five women of sexual misconduct, the reactions of his fellow comedians were eagerly anticipated by fans and casual observers. One of the comedians people were most interested to hear from was Marc Maron, host of the popular podcast WTF with Marc Maron, and a long-time friend of Louis C.K., whose appearance on the show’s 700th episode has long been considered one of WTF’s best.

Maron took to Twitter late Thursday night to say that a reaction to the news was coming, but he would wait until he taped his new episode.

I've been friends with Louis CK for a long time. I read the article and none of it is good. I'll have more to say about it on my own show and not a shitty platform like Twitter.

That next episode, featuring an interview with Kim Deal of the Breeders, dropped Monday morning. For those unfamiliar with the format of WTF episodes, each one typically begins with Maron flying solo for at least ten minutes. Maron goes on rants, does introspective deep dives and offers commentary on the news of the day. You could be forgiven if you skipped ahead to the guest. I usually do.

Not with this episode though. Maron dove right into the accusations being brought against his friend, as well as Louis C.K.’s response that all of the allegations were indeed true. Maron called Louis’ actions “vile, inappropriate, hurtful, damaging selfish shit” and said that he “certainly can’t condone anything he did. There was no way to justify it. There’s no way to defend it.”

Maron proceeded to break down the idea that was floated around following the report that everyone in the comedy community was aware of these acts and allegations and in turn, did nothing in response.

“Sadly, I knew what most people knew: There was a story out there, I guess going back several years, there were unnamed people in the story, it took place in a hotel room in Aspen. It was always out there, but then it would pick up momentum at different times,” Maron said. “And I would ask him about it. I would say, ‘This story about you forcing these women to watch you jerk off, what is that, is that true?’ He goes, ‘No, it’s not true. It’s not real. It’s a rumor.’ And I would say, ‘Well, are you going to address it somehow? Handle it? Get out from under it whenever it shows up?’ ‘No I can’t, I can’t do that. I can’t give it life, give it air.’ That was the conversation.”

Maron says that he never knew the names of the women involved until he read The New York Times report and this is due in large part to the fact that in comedy, “there’s no place there (women) could go with that information. There was no place for them to go with these stories where they felt safe to tell them.”

The lack of specifics led Maron to believe his friend, as Maron says “the environment enabled the dismissiveness of it (the allegations.) ”

“How do I put this? The work environment, the social environment makes it difficult for people to come forward and be heard, to be listened to, to be believed, and for action to be taken around that. It is pushed aside, it is dismissed, it is framed as an annoyance or an embarrassment, it is used against people, it is used as a threat, that is the structure that exists in life.”

Before wrapping things up, Maron talked about power structures and power dynamics and how both invite unfortunate incidents like the one Louis C.K. is guilty of. As a way to make his point about the dangers involved, Maron talked about his own experience in such a situation, adding that he was “not comparing myself to women in any way.” Yet while he was in college, Maron was enamored with a certain professor and sought out his help in a subject Maron was struggling in. The two went out to dinner one time and afterwards, the professor unexpectedly kissed Maron, freezing the young comedian and leaving him at a loss. 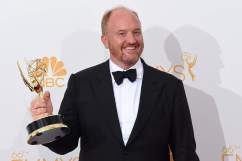 “It’s scarring, even if it’s mundane,” Maron said. “What I went through was mundane — there were no cocks involved — but it’s something women go through all the time. It was a disrespect of personal boundaries.”

Maron says he’ll remain friends with Louis C.K., saying he’ll be there for him if he needs him.