The 2017 MTV EMAs are finally here, and since the show will be coming live from Europe, fans are wondering how and when they can watch all the excitement. If you’re in the US and want to watch the EMAs,  tune in at 3pm ET/12pm PT.

Click here for a live stream of the red carpet, which will begin at 2pm ET/11am PT.

The show will be hosted by Rita Ora this year. Taylor Swift leads the pack with six nominations, followed by Sean Mendes with five.

American fans can watch Shawn perform at the #MTVEMAs on MTV at 3 pm EST! He's also nominated for 5 awards!

An impressive lineup is expected to perform, including Mendes, Bruno Mars, and Demi Lovato. Kesha will be performing “Love to Let Go”, Cabello will be singing “Havana”, and one of the most anticipated performances of the night is Eminem, who is slated to perform “Walk on Water”. At this time, there’s no information on whether or not Queen B will be joining him. Eminem is nominated for two awards tonight– Best Hip Hop and Best Live.

This marks the 6th time that the UK has hosted the awards show, and the second time London has hosted the ceremony. The first MTV EMAs took place in 1996 at the Alexandra Palace.

U2 will also be receiving the Global Icon Award at today’s show. Last night (Nov. 11) U2 performed for 7,000 people at London’s Trafalgar Square on Saturday night. They’ll also be taking the stage tonight.

Fans are waiting in anticipation to see who will win the award for Best Song and the award for Best Video. Clean Bandit’s “Rockabye”, DJ Khaled’s “Wild Thoughts”, Ed Sheeran’s “Shape of You”, Luis Fonsi’s “Despacito”, and Shawn Mendes’ “There’s Nothing Holdin’ Me Back” are up for the former. The latter category includes Foo Fighters’ “Run”, Katy Perry’s “Bon Appetit”, Kendrick Lamar’s “Humble”, Kyle’s “iSPy”, and Taylor Swift’s “Look What You Made Me Do.”

Ariana Grande, Ed Sheeran, Kendrick Lamar, Miley Cyrus, and Shawn Mendes are all up for the award for Best Artist. 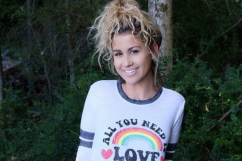