Natalie Morales and Matt Lauer once worked together on Today. On Wednesday, November 29, Lauer was fired from Today after executives were made aware of claims that he acted inappropriately toward a woman.

“On Monday night, we received a detailed complaint from a colleague about inappropriate sexual behavior in the workplace by Matt Lauer,” said NBC Chairman Andy Lack in a statement released Wednesday morning. It has since been reported that the accuser was someone with whom Lauer came in contact with during the 2014 Winter Olympics in Sochi. The statement went on to suggest that this may not have been an isolated incident.

Not long after Lauer’s firing was reported, people started wondering about his relationship (professional or otherwise) with his former Today co-host, Natalie Morales. Morales has not reacted to the news of Lauer’s firing.

1. Rumors that Lauer Had an Affair with Morales Surfaced in 2016

Back in 2016, rumors that Lauer had an affair with his then-co-host Natalie Morales surfaced. It was during the time that Morales announced that she was leaving Today for Access Hollywood. The rumors started as some kind of feud between Lauer and Morales and turned into full-fledged affair rumors shortly thereafter.

Just about everyone thought that Morales, who became a staple at Today, was leaving the show because of some sort of rift with Lauer. Although the two maintained a professional relationship over the years, some people couldn’t figure out why Morales was leaving and many just didn’t want to believe that she was making the move because it was a big step in her career.

“There’s speculation it’s one of the reasons why she’s moving . . . Matt didn’t want to work with her. There’s an awkwardness between Matt and Natalie . . . He protected her for a long time and now it seems like something has gone awry,” an insider told Page Six at the time.

It didn’t take long for these feud rumors to turn into something more. Morales and Lauer both released statements in an effort to debunk the rumors quickly.

2. They Both Addressed the Rumors Publicly

Both Morales and Lauer were quick to dispel the rumors, both releasing statements shortly after the rumors started spreading.

“There is absolutely no truth to this completely absurd story. It is damaging, hurtful and extremely sexist. I have proven myself in all aspects of my job as a news professional and journalist, and am adding to my role, taking on three jobs with Access Hollywood Live and Access Hollywood, in addition to ‘Today.’ This move was dictated by me and my desire to grow in my career. Any insinuations beyond that are uninformed,” Morales told Page Six.

“Every aspect of this story is untrue, and it’s frankly sad that someone would tell lies to harm everyone involved,” Lauer added.

Morales was also defended by Noah Oppenheim, a Today executive.

“Suggestion[s] that Natalie’s new role and salary is anything but the result of her merit, is not only not true — it’s sexism in its ugliest form and it’s offensive,” Oppenheim told Page Six.

3. They Were Both Married to Their Respective Spouses at the Time

Morales married her husband, Joe Rhodes, in Colorado in 1998. Rhodes earned his MBA from Columbia Business School and works as an investment banker. Morales and Rhodes are the proud parents of two boys, Luke and Josh. Over the years, Morales has been able to keep her marriage out of the tabloids. The only time that people wondered if she and Rhodes would split was after the Lauer affair rumors surfaced. Rhodes stuck by his wife’s side during that time, however.

Lauer married his wife, Annette Roque, after meeting her on a blind date back in 1997. The two have three children together, sons Thijs and Jack, and a daughter named Romy.

Things haven’t always been roses for Lauer and Roque. In fact, Roque filed for divorce back in 2006 (she was pregnant at the time), citing that she underwent “cruel and inhumane treatment,” according to InTouch Weekly. The legal paperwork was withdrawn by Roque a few weeks later.

4. Lauer Has Been Accused of Cheating on His Wife & Has Been Labeled a ‘Womanizer’

When he and Roque were engaged, Lauer was accused of having an affair with a married woman named Jessica Thorman. At the time, the woman’s husband, Zoltan Molnar, spoke to the National Enquirer, making bold claims against Lauer.

“He’s not the goody-goody nice guy he looks like on TV,” Molnar said.

In 2013, Lauer was accused of being “obsessed” with an intern who worked at Today. The young girl was identified as Lucie Fink, who reportedly admitted to having lunch with Lauer at the Four Seasons.

“Matt speaks to all the interns,” a source told the Daily Mail at the time.

5. Lauer Had Issues with Ann Curry & Was Blamed for Her Firing

In 2012, a scandal involving Lauer and Today anchor Ann Curry surfaced. In June of that year, Curry left Today, shocking fans of the show. Several reports indicated that Curry didn’t get along with her co-hosts, namely Lauer and Katie Couric.

However, speculation mounted that there was something even deeper between Curry and Lauer. The two didn’t have a good relationship — to say the least. They “barely spoke” outside of the show, according to The Hollywood Reporter.

Her departure was very emotional.

“Curry, who became very emotional on the air, insisted she write her own copy, telling Capus she wanted to ‘speak from the heart.’ While some at NBC believe she ‘purposefully self-destructed to damage both Lauer and the show,’ Curry ‘cried the entire way” to the airport after her final show. And the situation remained awkward. When she asked if she could send a note of sympathy to Robin Roberts, who was taking a leave of absence from GMA to get treatment for MDS, NBC execs told her no, ‘afraid she was trying to aid the enemy.’ In late July, she refused to appear alongside Guthrie on the air, as she believed that Bell might have been “trying to exploit the event for image repair.” 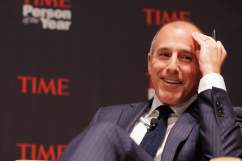