Oscar Pistorius: Blade Runner Killer is the story of the sprint runner Oscar Pistorius. He was dubbed the “Blade Runner” during his rise to fame as a gold medalist in the Paralympics. He was also the first double-leg amputee to participate in the Olympics.

On Valentines’s day in 2013, Pistorius shot his model girlfriend Reeva Steenkamp. He acknowledges that he shot Reeva 4 times, but he says that he thought she was a possible intruder. On September 12, 2014 Pistorius was found guilty of culpable homicide and one firearm-related charge. He received a prison sentence of a maximum 5 years for homicide and a 3-year suspended prison sentence for an unrelated charge.

Based on the true story and public records, the Lifetime movie premieres at 8 p.m. on November 11. Continue reading below to meet the cast of Lifetime’s new movie.

Pistorius’ model girlfriend, Reeva Steenkamp, will be played by Toni Garrn. Antonia “Toni” Garrn is a German model, which makes her particular fitting for the role. Garrn was born o n July 7, 1992 in Hamburg, West Germany. She is known for being a model in the 2011 Victoria’s Secret Fashion show and has recently started a career in acting. This movie will be her second role, following her performance in January’s Under the Bed. Under the Bed was also a TV movie. The movie was also a true story, following the events of where a stalker took up residence under the bed of his female target.

Pistorius is played by Andreas Damm, a South African actor known for television roles. Damm moved to the United States in 2005 to attend the University of Pennsylvania and then attended the New School for Drama. He graduated in 2012. Damm played Romeo in the television show Person of Interest for 4 episodes in 2014. He also starred in a 2016 episode of Elementary.

Reeva Steenkamp’s mother, June Steenkamp is played by Jean Alexander, an actress that has played small roles in short movies and television shows. She’s most well-known for playing the Gallery Owner in the TV series Satisfaction. It’s likely that Alexander will get plenty of screen time in this film, since the movie is told from the point of view of Reeva Steenkamp and her mother.

Coming Soon: 'Oscar Pistorius: Blade Runner Killer' & 'I Am Elizabeth Smart' | November | LifetimeThis November, watch the movie premieres of Oscar Pistorius: Blade Runner Killer and I Am Elizabeth Smart only on Lifetime. Oscar Pistorius: Blade Runner Killer on Saturday, November 11th.The story of the sprint runner dubbed the “Blade Runner,” and his rise to fame as a gold medalist Paralympic champion and as the first double-leg amputee to participate in the Olympics. I Am Elizabeth Smart on Saturday, November 18th. The definitive, authorized movie about the harrowing kidnapping of Elizabeth Smart, told from her perspective and with her full participation. Subscribe for more Lifetime shows: http://www.youtube.com/subscription_center?add_user=lifetime Check out exclusive Lifetime content: Website – http://www.mylifetime.com Facebook – https://www.facebook.com/lifetime Twitter – https://twitter.com/lifetimetv /posts Lifetime® is a premier female-focused entertainment destination dedicated to providing viewers with a diverse selection of critically acclaimed and award-winning original movies, scripted dramas, and unscripted programming. A favorite and trusted network for women, we are continually building on our heritage by attracting top Hollywood talent and producing shows that are modern, sexy, exciting, daring, and provocative. Visit us at myLifetime.com for more info.2017-11-05T13:00:04.000Z

Detective Bosman is played by Timothy Davis, an actor best known for his time spent as Chef Ryan on the critically acclaimed Showtime Series Billions. Davis began acting in college, where he majored in theater. His first film and television credits are in Steven Soderberg’s The Girlfriend Experience and an episode of Law and Order: Criminal Intent. He then moved to Los Angeles to pursue film and television acting.

There are more actors listed on the cast list, but it’s likely that since the story is so close to Pistorius and Steenkamp, other actors won’t get as much screen time as those listed above.

The families of Steenkamp and Pistorius were not contacted or consulted in the making of this movie. 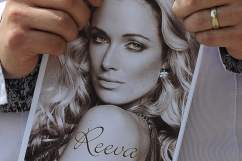