The 2017 Rockefeller Tree Lighting special, titled Christmas in Rockefeller Center, on the NBC network airs tonight at 8 p.m. in a two-hour long special. Prior to the primetime telecast, an additional live hour of the special will be broadcast on select NBC stations (7 – 8 p.m. ET). Check local listings. The show airs live on the NBC network, with a west coast time delay and the performers set to appear include Brett Eldredge, Jennifer Nettles, Leslie Odom Jr., Harry Connick Jr., Auli’i Cravalho, Seal, Train, Pentatonix, Gwen Stefani and The Tenors. Today Show hosts Matt Lauer, Savannah Guthrie, Hoda Kotb and Al Roker were all set to host the event, but Lauer has been fired from NBC over sexual misconduct allegations.

According to NBC, this year’s tree is 75 feet tall. The network’s official description reads, “The 85th annual holiday special will celebrate the lighting of a 75-foot tall, 50-foot wide Norway Spruce from State College, Penn. The tree weighs approximately 13 tons and is approximately 80 years old. It will be adorned with more than 50,000 multi-colored LEDs and will be topped with a stunning Swarovski star made up of 25,000 crystals and one million facets.” For tonight’s annual event, get to know more about each of the music artists set to perform below.

The @RockCenterNYC Christmas tree lighting is tonight! ? Tune in at 8/7c on @NBC to see my performance ❤ gx #RockCenterXmas #YouMakeItFeelLikeChristmas

Country singer Brett Eldredge has joined the roster to sing the classic holiday song “Blue Christmas.” Harry Connick Jr. is a staple in country music and he expanded his fan-base when he became a judge on American Idol, alongside Jennifer Lopez and Keith Urban. Last year, he launched his talk show HARRY and he continues to perform music as well. Performer Auli’i Cravalho first made a name for herself in Disney’s animated movie Moana. This teen sensation is currently starring on the drama series Rise. Seal has come out with a new album called Standards, which features classic hits like “Luck Be a Lady.” This past year, he appeared as a guest judge on America’s Got Talent, alongside ex-wife Heidi Klum. One of Seal’s most famous songs has been “Kiss From a Rose.” Last night aired Pentatonix’s Christmas special A Very Pentatonix Christmas and now tonight, they perform as part of this annual event. This year, Stefani releases a Christmas album, which is a first for her. Always in headlines is her relationship with Blake Shelton, who is currently starring as a coach on The Voice. Stefani, who was also a judge on the show, has taken time away from the show. As for musical trio The Tenors, NBC’s official press release states, “A decade after forming in their native Canada, The Tenors are an international success story. With their robust singing and seamless blend of classical and contemporary pop textures, Victor Micallef, Clifton Murray and Fraser Walters are multi-platinum certified artists featuring hit songs such as “The Prayer” and a cover of Leonard Cohen’s “Hallelujah.” Since the group’s beginning, they have shared the stage with Sarah McLachlan, Neil Young, Justin Bieber, Paul McCartney, David Foster and Natalie Cole. Their new holiday album, “Christmas Together,” was released in October in preparation of the upcoming season.” 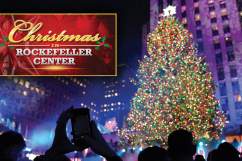