Matt Lauer was fired from NBC News on Wednesday after a complaint of “inappropriate sexual behavior in the workplace”. The news was announced on the Today show by Savannah Guthrie.

A memo sent to staff and obtained by the New York Times hinted at the fact that Lauer may be responsbile for more than one incident of this nature. “While it is the first complaint about his behavior in the over 20 years he’s been at NBC News, we were also presented with reason to believe this may not have been an isolated incident,” NBC News chairman Andrew Lack wrote.

The allegations brought against Lauer, who has been broadcast on television screens across the country for the past twenty years, have led to increasing curiosity about his family life. The 59-year-old has been married to his second wife, Annette Roque, since 1998, and together, the couple has three children.

1. She Is the Middle of Three Children

She is the middle of three children. Her older brother, Jack, is 16, and her younger brother, Thijs, is 11.

Romy’s parents were set up on a blind date by stylist Maria Santoro in 1997. They became engaged just five months later and wed in an intimate ceremony in New York. Annette Roque, Romy’s mother, is a former Dutch J Crew model, and filed for divorce from Lauer in 2006, citing “cruel and inhuman treatment” by Lauer. According to Radar online, the lawsuit was withdrawn just weeks later.

While his work hours were clearly demanding, Lauer spent as much time as his schedule allowed with his three young children. In an interview with Parenting.com, the former talkshow host was asked if he gets to spend as much time as he wants with his children. He said, “I would always want to spend more time with them, no question about it.”

2. She Is a Horseback Rider

Romy has followed in her mother’s footsteps by pursuing her interests in horseback riding.

According to her Annette Roque, the 14-year-old has ridden competitively in the Hampton Classic and other shows in the region. Annette tells Cottages & Gardens, “She loves the pressure and the performance.” Luckily, she gets to explore those talents on her parents’ own horseback riding facility.

Not long after settling in the Hamptons, Matt and Annette decided they wanted to build an equestrian facility. They eventually found a 40-acre plot of land, which they renovated and named Bright Side Farm. The business is a full service riding and boarding facility that includes fields, trails, and paddocks for both indoor and outdoor horse riding.

As of 2015, the Lauers owned five horses– one of which is a pony, Casanova, that Romy rides.

3. She Attends School in the Hamptons

Romy lives with her siblings and parents in Richard Gere’s former home in the Hamptons. Lauer purchased the house for $36.5 million in June 2016.

Speaking to Parenting.com, Lauer explained, “… my home is in the Hamptons and that’s where our kids go to school. As a result, I’m in [New York] city three or four nights a week, and I’m home on weekends. I go for school events–I do get out there for those. Because of this decision we made–and wanted to make for them– my time is consolidated into three intense days. The time is more precious and the time you spend is more significant.”

4. Her Parents Have Made a Point to Keep Her out of the Spotlight

Romy and her brothers have remained largely out of the spotlight, and her parents fully intended on things being that way.

Lauer has admitted to Parenting.com that he and his wife wanted to keep their kids off TV growing up. “We want them to maintain their privacy. In the almost-20 years I’ve been on the show, one of my children has been on the show for 20 seconds. I’ll talk on the air about homework or immunizations or what age can you have a sleepover.”

In an interview with People in 1998, Al Roker was asked what his favorite moment of Matt and Annette’s wedding was. “Their first dance,” he said. “Not even so much their dance, but watching them at the table. They would be talking to somebody, and when that person would leave, the two of them were looking into each other’s eyes. You could see they were truly, truly happy.”

From 1981 to 1988, Lauer was married to Nancy Alspaugh, a producer and screenwriter. Alspaugh has had a successful career as a writer and producer– she has been nominated for five Daytime Emmy Awards for her work on the talkshow Leeza. A published author, Asplaugh later remarried to H. Read Jackson, an executive at FOX. Sadly, Jackson passed away in 2016, after being diagnosed with cancer.

Lauer and Alspaugh did not have any children together. 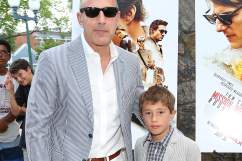