There’s a new couple in Hollywood– at least, we think there is.

Modern Family’s Sarah Hyland, 26, is rumored to be dating The Bachelor’s Wells Adams, 33. The two have been spotted hanging out together, and though neither has confirmed nor denied the rumors, their social media accounts suggest the pair are romantically involved.

Here’s everything we know about Sarah Hyland and Wells Adams.

1. The Couple Posted Pictures of One Another to Their Instagram Accounts Sunday Night

On Sunday evening, Wells shared the photo above with the caption, “Back lit AF.” In the picture, Sarah has her arm wrapped around his waist, and he’s smiling down at her with an arm draped over her neck. The two are quite obviously smitten.

Hyland posted a picture to her Instagram on Sunday as well, with the caption, “He puts up with me,” and a heart emoji.

Fans are going nuts over the supposed relationship. One fan commented, “U guys are adorable ♥️♥️♥️♥️♥️♥️”. Another wrote, “You hit the jackpot wells!!!!! #ultimatewinner.”

Both Hyland and Adams shared their Instagram photos to their Twitter pages– both retweeted the other’s photo, as well. The social media activity suggests this may have been their way of going public with the relationship.

Dear friends! Come hang out with me in Nashville November 6! I’ll be hosting a fundraiser for @curestartsnow with @shopbenediction ✨ Purchase your ticket through the link in my bio & be sure to enter the VIP ticket giveaway over @shopbenediction too! *** there will also be a select amount of $20 tickets too!*** Join me for exclusive, first access to the @shopbenediction jewelry collection focused on counting blessings and loving BIG. There will be swag bags, a customized necklace, & a polaroid with me included in the VIP ticket plus fabulous prizes all night long! #lovebig #thecurestartsnow #cancersucks

During his time on Bachelor in Paradise, Wells spent a great deal of time with Danielle Mitby. They even shared a kiss before Danielle left Paradise early to pursue a career opportunity in Africa. Before planting one on her, Wells told Danielle, “If anyone deserved to find someone here, it was you.”

After the show, Wells told US Weekly, “We are just friends right now… If things progress romantically, we’re going to take our time with that and not worry about the show or Twitter or anything like that trying to make us something that we’re not ready to be.”

After Wells posted the picture with Hyland to his Instagram this past weekend, some fans started questioning his loyalty to Danielle. Mitby, however, got in on the action, and wrote in the comments section, “Are you kidding me? I ship this couple SO hard! I’ve never seen Wells so giddy and happy! Try spreading some love instead of knocking down one of the cutest and most genuine coupling I’ve seen in a long time.”

3. They Dressed up for Halloween Together

Wells and Hyland dressed up together for Halloween. Last week, a source told People, “They’ve been friends for a while and now they’ve been hanging out and spending more time together… They’re flirty.”

11 hangin' out with a 10 #strangerthings

Wells went as Eleven, while Hyland dressed up as Dustin Henderson. Fans were curious about the Halloween hangout, and questioned whether or not the two were dating in real life. One fan wrote, “Are they a coupl?!” and another commented, “Oooh, please say you’re dating! Love you…love her…definitely a cute couple!”

4. Hyland Called It Quits with Her Longtime Boyfriend Dominic Sherwood over the Summer

In August, Hyland split from her boyfriend of two years, actor Dominic Sherwood. The two met in 2014, while filming Vampire Academy. Their relationship went public in March 2015.

In a 2016 ET exclusive, Sherwood dished, “Sarah makes me want to be a better version of myself… That’s what I love most about her. She inspires me to be the best version of me.”

Hyland seconded the sentiment. “I say this on a regular basis… It’s exactly what he said, which sounds like a cop out, but I say it all the time.”

Sherwood is known for his role as Jace Wayland on Shadowhunters. He also appeared on Modern Family in 2016 as James in the episode Crazy Train.

Wells and Hyland were caught flirting on social media long before they were ever linked to each other romantically.

In August, Hyland tweeted, “OH MY GOD @WellsAdams IS THE FRIKKIN BARTENDER?! Best. Season. Ever. #BachelorInParadise” to which Wells responded, “Taking applications for #BIP5 bar backs now. Please send references..Preferably from Phil Dunphy. I’m kidding the job is yours @Sarah_Hyland.”

Hyland shot back, “I’ll start working on my garnishing skills. Oh and I require 35% of your tips…. or free dogs” 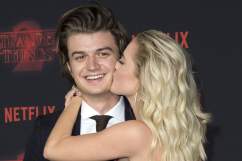