.@selenagomez came through with a new look and we are LOVING it! ❤️ #SELENAxAMAs pic.twitter.com/WOhYahStal

Tonight is the 2017 American Music Awards and Selena Gomez will be taking the stage to perform her single “Wolves.” This is the first time that Gomez has given a performance since her kidney transplant over the summer. And, it’s the first time that Gomez has appeared on stage since rekindling her romance with former sweetheart Justin Bieber. Fans were surely hoping that Gomez would hit tonight’s AMAs red carpet hand-in-hand with her man Bieber, but that did not happen. Nevertheless, Gomez did surprise viewers by rocking a brand new look with blonde hair. Check it out in the above Twitter video.

In recent weeks, Gomez and Bieber were spotted on what appeared to be some day dates. The two were also seen attending sporting events and even church together. Most recently they were seen sharing a kiss at one of Bieber’s hockey games. According to TMZ, Bieber initiated their re-connection after hearing about Gomez’s health crisis. Just as news that the former couple were hanging out again broke, it was revealed in October 2017 that Gomez and boyfriend The Weeknd had split up. According to a source, Gomez’s battle with Lupus and her kidney transplant played a part in the couple’s demise. The source told Entertainment Tonight, “They’re done. It wasn’t going to last. During the kidney stuff, Selena really relied on her friends as opposed to The Weeknd. He just wasn’t really available to drop everything he had going on to be with her full-time.” And, when it came to Gomez’s friends and The Weeknd, the source added, “They never really liked him. He’s not a part of the church group and didn’t really mesh with her friends. And at this point, those friends and her faith mean everything to her.”

Two of Bieber’s songs, DJ Khaled’s “I’m The One” and Luis Fonsi and Daddy Yankee’s “Despacito”, are nominated at tonight’s American Music Awards, but he may not show up since he’s been taking time away from the spotlight. And, according to Hollywood Life, Gomez is “determined” to keep her rekindled relationship with Bieber low-key. A source revealed that, “Selena doesn’t want the AMAs to be all about their relationship. She’s focused on her performance, and that’s what she wants people to be talking about after the show … This is Selena’s first public performance since she canceled her [Revival World Tour] and she feels a lot of pressure to really deliver.”

As far as Bieber and Gomez’s getting back together goes, a source told Entertainment Tonight that the two have definitely evolved. The insider explained, “They’re really happy and enjoying this time together. They’ve both grown a lot over the years and are excited to have reconnected. They are together all the time. They’re so happy and having so much fun together.” Another source recently told People that, “Justin is still very happy. They have had quiet date nights at home and outings to local, low-key sports. They are still catching up and just enjoying hanging out. They have learned from past mistakes and are not putting any pressure on each other. Things are much different and more mature.” 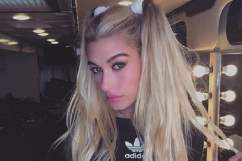