One of the most enigmatic and mysterious actors on Star Trek: Discovery is Javid Iqbal. In fact, he’s so mysterious that many fans think he doesn’t actually exist. He’s the actor who plays Voq. But since Voq disappeared on the show when setting out to visit the Klingon Matriarchs, fans have started wondering about Javid Iqbal. The actor keeps to himself and hasn’t shown up for any interviews about the show. Read on for theories and details about Javid Iqbal and Shazad Latif.

Warning: There are potential major spoilers below if the theories end up being accurate. The theories have not yet been confirmed, but they have compelling evidence.

Fans think that Javid Iqbal is just a placeholder name for the actor who plays Ash Tyler, Shazad Latif. Fans first became suspicious when they remembered that Latif was originally set to play Kol, a protege of T’Kuvma. T’Kuvma’s protege was later renamed Voq and the “Kol” name was given to a leader of a rival Klingon house. Latif was then cast as Ash Tyler instead.

Latif has a long history that you can read on IMDB here. His appearances include Still Star-Crossed, Penny Dreadful, Toast of London, Ordinary Lies, My Mad Fat Diary, MI-5, The Silence, and more.  He was born in 1988 and studied at the Bristol Old Vic Theatre School.

Javid Iqbal, meanwhile, is a mystery. Go to his IMDB page and there’s nothing there but Star Trek: Discovery. Search his name and you’ll only find stories about him on Star Trek. The only personal detail given for him on IMDB is that he’s 5’11”. (Latif, meanwhile, is listed as 6’1″.) If you dig enough, you’ll find a Javed Iqbal who’s a Pakistani philosopher and senior justice of the Supreme Court of Pakistan. This is not the Iqbal you’re looking for — he died on October 3, 2015. And there’s another Javid Iqbal on IMDB here but his only credit is a web series from 2015, not Star Trek.

Adding to the mystery is that Latif has been credited as a series regular since the show began, even though he didn’t actually appear on screen until the fifth episode.

Oh, and let’s not forget this little tidbit: Shazad Latif’s original name is Shazad Khaliq Iqbal, according to his Wikipedia entry.

Adding to the confusion is that pretty much all the actors on Discovery have given interviews but Iqbal. He’s been missing and hasn’t had a single appearance.

Latif himself has spoken out against these theories. When asked if Iqbal was real, he simply said: “Well, yeah, if you check IMDb he’s an actor on Star Trek: Discovery.” This could be a nice way of Latif keeping the secret without outright lying, however. When pressed for more information, a publicist stepped in and said they were out of time.

Later on, he got a little more specific and said that he’d actually met Iqbal before at a party. Jason Isaacs, who plays Captain Lorca, started talking about how Sonequa Martin-Green hosted game nights for the crew at his house. Iqbal said that yes, he had met Iqbal at one of those parties. But Isaacs cut in before he could expand on that.

The mystery hasn’t been solved with the fall finale. Some fans think that Ash Tyler’s flashbacks disprove this theory and the Iqbal mystery is a red herring, designed to throw us off and lead us down the wrong path. What do you think? Let us know in the comments below. 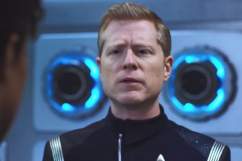