Read on for spoilers for Season 8 Episode 5.

At the very end of the episode, Eugene went and found Gabriel. He had been placed in Cell Number 2, the same type of cell where Daryl had been put before. And now he’s really sick. When Eugene found him, a strongly shivering Gabriel said something that was tough for some fans to understand. Here’s exactly what was said.

Earlier in the episode, Gabriel had told Negan that he thought he was there to take Negan’s confession and give him absolution and forgiveness from God. But now it seems that Gabriel is coming up with a different idea about why he’s there. He’s still trying to find the “bigger reason.” Maybe he thinks his sickness is the only way that he can see Dr. Carson and help him escape.

Maybe he thinks Dr. Carson is necessary to make sure Maggie survives giving birth. We know she hasn’t yet, and maybe Gabriel thinks his reason for being there is to free Dr. Carson so Maggie has a better chance at survival. She hasn’t been sick or had any problems recently, but a pregnancy is definitely not an easy matter in The Walking Dead universe.

Learn about what fans think is wrong with Gabriel in the story below. 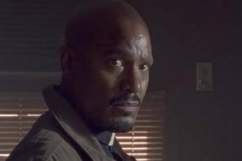