On Wednesday, Matt Lauer was fired from NBC News after a complaint of “inappropriate sexual behavior in the workplace” that took place during the 2014 Sochi Olympics.

The news was announced on the “Today” show by Savannah Guthrie. “We are devastated,” Guthrie said in regards to the complaint, which was filed on Monday night.

Lauer, 59, has been married to his second wife, Annette Roque, since 1998. The couple has three children together.

Read on to learn more about Thijs Lauer.

1. He Is the Youngest of Three Children

He is the youngest of three children– his two older siblings, Jack and Romy, are 16 and 14, respectively.

Roque is a former Dutch J Crew model. She and Lauer were set up on a blind date in the summer of 1997 by stylist Maria Santoro. They became engaged just five months later, and married in Water Mill, New York. According to People, the wedding was intimate with only 100 guests. Many of Lauer’s colleagues attended the ceremony, including Katie Couric, Ann Curry, Jill Rappaport, and executive producer Jeff Zucker.

2. Annette Roque Filed for Divorce in 2006 When She Was Pregnant with Him

Two months before Thijs was born, Roque reportedly filed for divorce, citing “cruel and inhuman treatment” by Lauer, according to documents obtained by Radar Online.

Roque’s attorney, Nancy Chemtob, is reported by Radar Online as saying, ““The conduct of defendant (Matt) so endangers the physical and mental well-being of plaintiff (Annette) so as to render it unsafe and improper for plaintiff to cohabit with defendant.”

Chemtob added on that Lauer was “extremely controlling” of Roque. Radar reports the attorney as saying that Lauer refused “to allow plaintiff to make even the smallest decisions without his approval, including, but not limited to, decisions regarding finances, travel plans, decorating the parties’ homes and domestic help issues.”

The lawsuit was withdrawn by Roque just weeks later.

3. He Resides at His Parents Home in the Hamptons

In June 2016, Lauer bought Richard Gere’s home in the Hamptons for $36.5 million, according to Architectural Digest, where his children attend school and spend most of their time.

Speaking to Parenting.com, Lauer explained he and his wife’s decision to move out of Manhattan. “… my home is in the Hamptons and that’s where our kids go to school. As a result, I’m in [New York] city three or four nights a week, and I’m home on weekends. I go for school events–I do get out there for those. Because of this decision we made–and wanted to make for them– my time is consolidated into three intense days. The time is more precious and the time you spend is more significant.”

The couple’s 14,000-square-foot house, also known as Strongheart Manor, sits on Peconic Bay, and includes 12 bedrooms and a large wrap-around porch. The property itself occupies six acres, and comes equipped with a dock, a pond with a bridge, and an “entertaining pavilion” with a fireplace, gym, and basketball court, according to Architectural Digest.

Lauer and his wife have made a point of keeping their kids’ lives private. Lauer says that he and Roque have a “longstanding guideline” about keeping their kids’ off TV. “We want them to maintain their privacy. In the almost-20 years I’ve been on the show, one of my children has been on the show for 20 seconds. I’ll talk on the air about homework or immunizations or what age can you have a sleepover.”

Speaking to Parenting.com about fatherhood and raising a family in the public eye, Lauer explained that he hopes to be a positive role model.

Parenting.com writes, “Lauer tells Parenting that it’s his goal to raise awareness about the difference a positive male role model can make in a child’s life. He personally created the ad in partnership with the US Department of Health and Human Services’ Administration for Children and Families, Office of Family Assistance and the National Responsible Fatherhood Clearinghouse.”

5. His Parents Reconciled One Month Before He Was Born

Lauer and his wife reconciled two months before Thijs was born.

According to the outlet, Thijs (pronounced “Tice”) is a Dutch name. A source is reported as saying, “Annette is Dutch and in following with her heritage, the baby was given a Dutch name.” 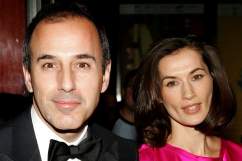