Let’s start here: Cate Blanchett is an incredibly successful actor. She has won two Oscars, three British Academy Awards, three Golden Globes, three Independent Spirit Awards among many others. When her portrayal of Katherine Hepburn in The Aviator was awarded an Oscar, she became the first actor to ever win an Academy Award for playing another actor and she is one of only six actors to receive multiple nominations for playing the same role. She played Queen Elizabeth in two films: Elizabeth and Elizabeth: The Golden Age.

Now the award-winning actor is taking her talents to the Marvel Cinematic Universe. Blanchett plays Hela, the villain in Thor: Ragnarok. Blanchett was encouraged to play the part by her children who are Marvel fans and based on the trailers, it looks like she enjoyed every minute of it.

So who is Hela?

For starters, Hela is the first female villain in the Marvel Cinematic Universe. But let’s go back even further.

Hela is the Goddess of Death and the former Executioner of Asgard. Asgard is of course the fortress of the Gods and while there, Hela, who is the oldest child of Odin and as a result, older sister of Thor and Loki, was the leader of the Einherjar. With Hela’s help, Odin was able to conquer the Nine Realms. Odin had his antenna up when it came to his daughter and her ambitions though, and subsequently banished her from Aasgard, sending her to Hel.

Hela attempted to escape Hel once, only to be beaten back by Valkyrie (played by Tessa Thompson in Thor: Ragnarok) and the Valkyries, who were all killed in the process. Hela’s window to escape was flung open upon Odin’s death though, as it was the God’s life force that was keeping her imprisoned in Hel. Hela would go on to cast Thor and Loki aside and lay siege to Asgard, which is where it appears Thor: Ragnarok picks up.

Hela, like other Marvel villains, definitely has a penchant for mass-destruction and world domination, but the added dimension of family drama makes her role more layered than past villains. Thor: Ragnarok director Taika Waititi has said that the complexities of Hela’s character is what will set her apart from other villains.

“She is multidimensional. She’s layered. She’s troubled. She’s really funny. And, you know, it’s not just ‘If I can finally get the thing then this will happen!’ There’s, like, a little bit of that, but there’s so many other things going on for it.”

In a separate interview Tessa Thompson elaborated on Waititi’s point, adding that Blanchett was the perfect choice to bring Hela to life.

“She’s not a villain without reason, and I know that with an actress like Cate Blanchett, she will bring all of the depth and humanity to it. To me, that’s what’s so exciting, like when I saw Captain America: Civil War, I was like, ‘How cool that you have a superhero movie but it’s about friendship and you really get where these people are coming from.’ I think that’s what keeps people in the seats.”

Another wrinkle here is that Thor: Ragnarok may not be the last we see of Hela. For the most part, villains and bad guys in the majority of superhero movies die at the end or at the very least, are locked up and imprisoned. As for Hela, there is some speculation that she could play a role in the upcoming Avengers: Infinity War.

“Hela could replace the physical embodiment of Death that Mad Titan Thanos falls in love with when he obtains the Infinity Gauntlet in the comic books on which the Avengers: Infinity War movies are loosely based. The general thought is that having a character representing Death suddenly appear in a big Avengers movie would be more confusing to audiences than a character they already know.”

That would mean in Infinity War, the Avengers wouldn’t be only up against Josh Brolin’s Thanos, but Blanchett’s Hela.

Good luck with that. 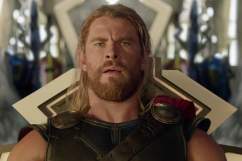