Tonight, Jamie Foxx and his daughter opened up the 2017 American Music Awards with words of inspiration. Foxx said that 2017 “was the year that tested our fates”. Along with Foxx, there were several first responders who stood on stage to show their strength and faith that 2018 will bring a brighter future. Foxx talked about the tragic shootings and hurricanes that have devastated our world in recent months. Foxx then introduced Pink and Kelly Clarkson, who delivered the opening performance for tonight’s show.

Pink started off the performance by solemnly singing the song “Everybody Hurts.” Soon, she was joined by Clarkson and both were dressed in long, black outfits, making for an emotional set. The two walked to the middle of the stage together, smiled, and continued to serenade the crowd. Audience members in the front stood in the pit for the performance and some could be seen wiping their eyes. At the end of their performance together, the two smiled again and shared an embrace.

Such an incredibly moving and powerful performance from @Pink and @kelly_clarkson!@AMAs #AMAs pic.twitter.com/ICpIW6uN8z

Following their performance, host Tracee Ellis Ross took the stage and asked for another round of applause for the two stars. She then talked about how excited she was to honor her mother, icon Diana Ross, for the Lifetime Achievement Award at tonight’s show. Ross then pointed out all of her family members in the crowd. Ross also congratulated Kelly Clarkson on her 15th anniversary of winning American Idol. Clarkson laughed from the audience with her little girl sitting on her lap.

Later on in the show, Pink is set to perform again in a death-defying stunt, hanging from a building. Kelly Clarkson will also take the stage once more tonight to perform. 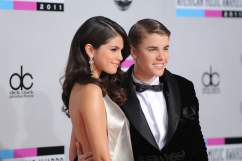