Model Ming Xi recovered beautifully from her fall at the 2017 Victoria’s Secret Fashion Show on Tuesday.

While the 28-year-old may have been embarrassed, she handled the mishap with the utmost elegance as she smiled and finished her walk down the runway.

Viewers watched Xi break into sobs as she completed her run. A source tells E! News, “Ming was really upset when she fell on the runway. It was a hard fall… She got up as gracefully as she could. She was shaken up after that fall. All the models made her feel better after though. She is OK now.”

From the looks of it, Xi’s heel slipped from under her as she made her way down the runway. She later apologized to her fans on social media through her Weibo account, writing, “I’m sorry to let everyone down. Thanks for everyone’s concern.”

Fans and viewers flocked to Twitter to express their support for Xi. One fan wrote, “The smile Ming Xi gave after falling was the most beautiful thing I’ve seen. Then her tears brought me to tears too.” Another commented, “She fell down… She got back up smiling and still looking beautiful; I like that.”

The smile Ming Xi gave after falling was the most beautiful thing I’ve seen. Then her tears brought me to tears too. #VSFashionShow

Xi started her modeling career in 2009. She took off internationally in 2011 after walking the runway for Givenchy Haute Spring Show.

Xi has walked every Victoria’s Secret Fashion Show since 2013.

In 2014, Audrey Magazine wrote that she was one of the “busiest and most in-demand models” of the time.

According to WWD, Xi addressed her fall the day after the show while attending a dinner by designer Olivier Rousteing.

“It’s life, I’m going to face it,” Xi is reported as saying. “I fell, but you know, I think the most important thing is that I get back up. I had the love, the help from my sister — the girl next to me Gizele [Oliveira] — she’s so nice. When I went backstage everybody was trying to comfort me like ‘Oh Ming, it’s OK.’ I’m really, really touched. I think it’s them who gave me the courage to go back on stage for the finale.”

Still, Xi admits she’s stung by the experience. “I’m not saying that I did it right or find an excuse for myself but it happened. That’s what it is. I tried to deal with it. And thank you everyone who heard about me and asked me about my leg and ankle.” 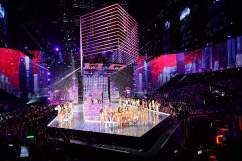 All Models Walking in the Victoria’s Secret Fashion Show 2017