Some of the locations where filming took place for the movie include:

Langley, British Columbia was one of the locations for some scenes filmed in Coming Home for Christmas. The city has a population of just 25,000 (as of 2011) and the city’s downtown is very pedestrian oriented, lined with cute restaurants and shops on either side. But it looks like it was downtown Abbotsford in Canada that was filmed for this movie, not downtown Langley. Abbotsford has a population of 141,000 (as of 2016).

Downtown Abbotsford is known for its beautiful Christmases, including a Winter Jubilee held in early December.

But the movie wasn’t filmed in December, it was filmed in August. Here’s a look at what downtown Abbotsford looked like as they prepared for the film:

Parts of the movie were also filmed at Fort Langley.

But of greatest interest to readers is probably the real-life location of the Ashford Estate. As you can see from earlier in this story, the Estate was filmed at a private mansion in Langley. Here’s a video about the beautiful mansion, just filmed in 2016.

Here are some more pictures from the filming:

Just sitting down for a nice family dinner on the set of #ComingHomeForChristmas w/ @chelan.simmons @christianconvery @hallmarkchannel

SO wonderful having my son & mom on set with me today!! #ComingHomeForChristmas @hallmarkchannel @mckellarmahaila #ilovebeingamommy 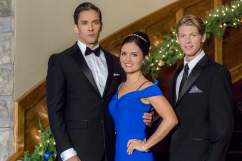