Hallmark’s newest Countdown to Christmas movie, Finding Santa, wasn’t filmed where you might think. The movie’s story takes place in a small town of Green River, Connecticut, where Grace is running the Christmas parade. She must find a new Santa at the last minute after their regular Santa gets injured. But this movie isn’t filmed in Green River. In fact, most Hallmark Christmas movies aren’t actually filmed in the fictional towns where the movie took place.

Some of the locations where the movie was filmed include:

@WhatsFilming they're setting up outside a little bistro in Aldergrove with snow and Christmas trees, any idea what it could be?

Unlike many Hallmark movies that are filmed in the summer, Finding Santa was filmed later in the season, closer to the time the movie takes place. Other Hallmark movies were filmed in BC this year, including the Mistletoe Inn and A Gift to Remember.

Ladner Village on Delta Street is a popular location for Christmas filming, a local news site shared. Some of the specific locations in Ladner Village included Bridge Street to 48th Avenue, where a parade and a candlelight stroll were filmed. The story noted that environmentally safe snow and blowers were used for most of the scenes. Finding Santa was the fourth Hallmark holiday movie filmed in that region that year. You can see a gallery of photos from the filming here:

By the way, Ladner Village looks like a lovely place to visit at Christmas time. According to Facebook posts, they have a Christmas Tree Festival that includes a gingerbread contest, a tree lighting ceremony, a countdown to Christmas contest, a live musical performance, a specialty mailbox to drop off letters to Santa, complimentary hot chocolate, a visit from Santa and more. The festival appears to take place in the same location that the parade was filmed and sounds like a regular Hallmark-worthy event.

Here are some more photos from the filming:

Ready to start day 1 of my @hallmarkchannel movie #findingsanta ! Here we go!!

Did you like the movie? Let us know in the comments below. 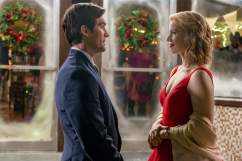