Hallmark Christmas movies are known for their absolutely idyllic views and beautiful scenery. Many viewers will watch a movie and immediately want to know where the movie was filmed, so they can visit the town themselves. Often, the movies are not filmed in the states that the script indicates. But the cities they’re filmed in are still beautiful and worth a visit. Hallmark’s Christmas Festival of Ice is no exception.

The synopsis for the movie reads:

“Those years of law school pay off for Emma but not in ways one would expect. When she finds out that her beloved ice-sculpting contest, part of her hometown’s Christmas festival, has been canceled, she springs into action. Determined to keep it going, she enlists sponsors and artists. Nick, the town’s ace artisan, isn’t interested in competing this year, but Emma wants him as her teammate. Considering what she’s managed to accomplish, Nick is impressed and signs on. As Emma and Nick work together, she realizes there’s more to life than legal briefs. And transformed by Emma’s can-do spirit, Nick is invigorated, too. They just might have a shot at winning this very special Christmas contest — and a lot more.”

In the movie, the Christmas Festival of Ice takes place in a small New England town. But in reality, the movie was actually filmed in a beautiful Canadian town.

Christmas Festival of Ice was filmed in the beautiful town of Almonte in Canada.

The city’s local newspaper, The Millstone, proudly shared this fact in February.

Many of the small town locations you see in the movie were filmed on Almonte’s Mill Street to give off the feel of a small New Hampshire town. An American flag was even added to the town to give off the perfect vibe.

One of the restaurant scenes takes place in the town’s Superior restaurant. It’s the scene where Emma meets a friend, the publication explains. Here’s an indoor photo, from Facebook:

And an outdoor photo:

Another article, since deleted but readable on cache from MSN, also talked about the movie’s filming location. This movie was the fifth time in two years that filmmakers came to Almonte, and at least the second time a Hallmark movie was filmed there.

Ainslie S. Wiggs, a location manager, explained the choice: “It’s a small town that’s got a lot of modern conveniences and a lot of great stores, and at the same time it has maintained that historic flavor.”

Also rented out for filming was Baker Bob’s. Many of the extras in the movie were local residents. Bob Graffe, owner of Bob’s Bakery, said: “I guess we are a mini Hollywood of the Valley… It highlights that we’ve got a very pretty town, a very photogenic town…”

Do you recognize Baker Bob’s? Here’s an outdoor view of how it normally looks, from its Facebook page:

The last Hallmark movie filmed in Almonte was Love on a Limb. Those producers also rented local artwork for some of the scenes and paid locals to do security work.

“The Rooftop Christmas Tree” was also filmed in Almonte in 2016.

Love on a Limb was that adorable Hallmark movie starring Trevor Donovan and Ashley Williams, where Ashley was trying to save a tree from being cut down because it reminded her of her father. 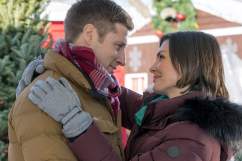 Hallmark’s ‘Christmas Festival of Ice’: What Time & Channel Does It Air Tonight?