Wrapped Up In Christmas is a Christmas love story that premieres on Lifetime on November 25 at 8 p.m. The story revolves around Heather, the manager of a large mall who learns that she has to cancel the leases of under-performing stores at the mall and Ryan, the son of one of the under-performing toy stores in the mall.

The story starts when Heather’s niece asks Santa to help find a boyfriend for her aunt. The Santa that Heather’s niece talks to is actually Ryan, who is working at his aunt’s toy store in the mall to help her out for the holidays. Heather and Ryan begin to fall for each other, but they keep their identities secret. Heather is being forced to close Ryan’s aunt’s store, and Ryan is ashamed to admit that he’s atually the mall’s Santa.

Wrapped Up In Christmas is produced by ARO Entertainment, with Jeff Schneck as the executive producer. The script was written by Jennifer Notas Shapiro and Peter Sullivan directs the film.

Read on to meet the cast of Wrapped Up In Christmas

Tatyana Marisol Ali-Rasberry stars as Heather Nash. Ali is an American actress and singer known for her role as Ashley Banks on the NBC sitcom The Fresh Prince of Bel-Air. Ali began her acting career at the age of 6 as a regular child performer on Sesame Street starting in 1985.

During her time on The Fresh Prince of Bel-Air, Ali sang in a few different episodes, which led to actor Will Smith asking her if she was seriously considering pursuing a musical career. She continued concentrating on acting in Fresh Prince until the end of the series, when she began her musical career.

In 2002, Ali graduated from Harvard University with a bachelor’s degree in African American Studies and government. She traveled with Barack Obama’s presidential campaign in 2008 as a spokesperson.

Fehr has modeled for Levi’s Calvin Klein, Emporio Armani and DKNY Jeans. The actor broke into television in 1997 when he was cast in Breaker High. He then starred in a regular role on the Sci-Fi TV series Roswell from 1999 to 2002.

In 2014, Fehr began playing the role of Dr. Drew Alistor in the NBC drama The Night Shift. The show ran for 4 seasons.

Kim Fields poses for a photo before a screening on July 1, 2017 in Dallas, Texas. (Getty)

Fields joined the cast of The Real Housewives of Atlanta in season 8 and competed on season 22 of Dancing with the Stars. She finished the competition in 8th place.

Cindy Pickett performs at the VDAY West LA 2006 Show at the Ivy Substation on April 24, 2006 in Culver City, California. (Getty)

Cindy Pickett stars as Patty McKee. Pickett is an American actress known for her role as Jackie Marler-Spaulding on the CBS soap opera Guiding Light and her role as Dr. Carol Novino on St. Elsewhere in the 1980s. 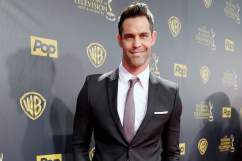 ‘Framed by My Fiancé’: Meet the Cast of Lifetime Movie Network’s New Movie