Tonight is the live broadcast of the musical A Christmas Story Live, airing at 7 p.m. ET/PT on the FOX network. The east coast is the true live airing, while the west coast will be on a time delay. Stars including Matthew Broderick, Maya Rudolph, Ana Gasteyer, Ken Jeong, David Alan Grier, and Jane Krakowski join a cast of newcomers who are hoping to deliver a stellar production of a holiday classic. According to David Madden, the President of Entertainment in Fox Broadcasting Company, “A Christmas Story is one of the most beloved holiday films of all time – audiences have made a yearly ritual of re-watching it – and we are so thrilled to have Marc leading the charge in bringing the musical version of that film to television. The extraordinarily gifted Pasek and Paul were instrumental in transposing the movie to the stage, and we believe the transition to LIVE television event will be just as entertaining for viewers.” Benj Pasek and Justin Paul, known for La La Land, composed several new songs for A Christmas Story Live.

But, A Christmas Story Live isn’t the only live production on FOX tonight. According to a press release put out by the FOX network, the stars of the new movie The Greatest Showman will participate in the first-ever live theatrical commercial. Headliners Hugh Jackman, Zac Efron, Zendaya and Keala Settle, will all perform the movie’s original song, “Come Alive.” Michelle Marks, Senior Vice President, Marketing and Global Media Promotions for 20th Century Fox Film, released the following statement about the commercial. Marks said that, “We are creating what we expect will be a memorable performance providing energy and excitement to viewers that drives them to see The Greatest Showman. This first-ever live commercial for a feature film is one that P.T. Barnum would be proud of and one that I hope paves the way for future titles.”

If you don’t have cable or can’t get to a TV, you can watch Fox online, on your phone or on another streaming device like an Amazon Fire TV or Roku via one of the following over-the-top, cable-free, live-TV streaming services. They cost a monthly fee but all come with a free trial, so you can watch tonight’s show for free if you’re in a select market:

FuboTV: Fox (live in 70-plus markets) is included in the “Fubo Premier” channel package, which is $19.99 per month for the first two months and $39.99 per month after that. It comes with a free 7-day trial, and you can watch on your computer via your browser, or on your phone, tablet or streaming device via the FuboTV app

DirecTV Now: Fox (live in 39 markets) is included in all four channel packages, ranging from $35 to $70 per month. It comes with a free 7-day trial, and you can watch on your computer via your browser, or on your phone, tablet or streaming device via the DirecTV Now app

Sling TV: Fox (live in 17 markets) is included in the “Sling Blue” channel package for $25 per month. It comes with a free 7-day trial, and you can watch on your computer via your browser, or on your phone, tablet or streaming device via the Sling TV app

The musical adaptation of the movie A Christmas Story came about in 2012 and won three Tony awards. According to the FOX network, “The musical was based on the motion picture A Christmas Story, written by Jean Shepherd, Leigh Brown and Bob Clark, and the novel “In God We Trust: All Others Pay Cash” by Jean Shepherd. The now-classic 1983 feature film, which became a sleeper hit, has since taken on a new life, along with growing critical acclaim, to become a perennial holiday favorite beloved by families and kids of all ages.” 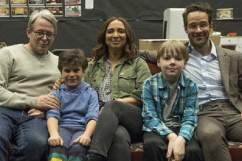