Kourtney Kardashian and boyfriend Younes Bendjima appear to be in it for the long haul, though Keeping Up With the Kardashians fans don’t get to see the two canoodling on the show. When the two vacationed together during the Cannes Film Festival, the aftermath was shown on KUWTK, with Kardashian’s ex Scott Disick visibly upset. At the time, a source told E! that, “Kourtney and Younes are having a lot of fun together. She really appreciates how responsible he is and that he doesn’t party. He’s the opposite of Scott in many ways and that’s been great for Kourtney to experience.” Towards the end of the Cannes trip, Scott Disick was reported to be hanging out with Sofia Richie, 19, who he is in a relationship with today. Meanwhile, Kardashian and her boyfriend Bendjima, were seen hanging out aboard a private yacht, according to Daily Mail.

More recently, Kardashian and her model beau have been going on more vacations together. They have also been going out in public together at events, even dressing up as Bonnie and Clyde together for Halloween, according to People. An insider told E! News that, “They are very serious. He has been staying at her house a lot, but only if the kids are not there. They will be spending holidays together and Younes is invited to the Kardashians’ holiday party.” People reports that the couple are keeping Kardashian’s children separate from their relationship publicly for now. On the other hand, Elite Daily recently reported that Bendjima left a comment on an Instagram photo of Kardashian’s son Reign, writing, “Baby Reignoosh.”

The Sun reports that the couple met during Paris Fashion Week and that Bendjima was actually with Kardashian at a club when her sister Kim was robbed in Paris. The two, however, were said to start dating in Spring 2017. According to The Daily Mail, when Kardashian first met Bendjima, she thought he didn’t like her and she confronted him about his “rudeness”. This apparently sparked something between the two of them.

When talking about her first encounter with Bendjima on Keeping Up With the Kardashians, Kardashian told her sister Khloe, “Yeah, we like walked into a bar and Stephanie [Sheppard] was across from me and she kept going, ‘This guy’s cute over here.'” Kardashian continued, “He was friends with our friends. He would walk in, say hi, shake hands with like our security or whatever, but like not say hi to us. And then I was like, ‘Why do you hate us?’ I was just drunk. Once I said that he literally like grabbed my hand and was like, ‘It’s five in the morning. We’re leaving.’ And then next night Younes was like, ‘Bring your ass here.'” Kardashian also said that Bendjima asked her if she likes when he’s “aggressive” and her reply was “yes.” Stephanie Sheppard, who was with Kardashian, is the former assistant of Kim Kardashian and also has had a close friendship with Kourtney Kardashian. 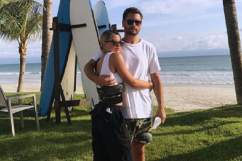