One of the best episodes in all of Season 4 of Black Mirror is Black Museum, and that’s not an exaggeration. It captures the spirit of White Christmas with three tales intertwined, and leaves us with a twist that we’ll be talking about for quite a while. I loved this episode and the backstories it gave me to the Black Mirror universe, along with the unique and sometimes very dark storylines that were uncomfortable and intriguing all rolled into one. Warning: This article has spoilers for Black Museum and episodes from previous seasons.

When the episode first begins, the scenery actually reminds me a bit of Metalhead, with all the desert and the sweeping landscapes. But that’s where the comparisons end. This time we’re in the United States (unusual for Black Mirror) and things are about to get very, very intense. The museum our protagonist arrives at looks like it’s been abandoned for a long time, and that’s not too far from the truth. It doesn’t have the number of visitors that it used to have — and there’s a good reason for that. Rolo Haynes owns the museum, and he may very well be one of the creepiest people you’ll ever meet.

Her journey through Rolo Hayne’s Black Museum takes twists and turns into the background of Black Mirror that I hadn’t expected, but was thoroughly intrigued by (let’s face it, I can’t say “thoroughly enjoyed” considering the dark turns it took.) And Rolo Haynes turns out to be the face of Black Mirror that we’ve always known was there, hidden behind a curtain, finally out front and center. In the end, nothing is left untouched — not even the heartwarming ending I thought I enjoyed in San Junipero.

We’re taken through a journey of “authentic criminological artifacts.” Keep in mind, these are all based on technology that now has a criminal element too it. This means that a lot of what we saw in previous episodes, now featured in the Black Museum, has been banned. Those bees from Hated in the Nation? Apparently banned. The White Bear park? Now outlawed. You might even notice some tech from episodes from this season in the museum. (As an interesting note, a real Black Museum exists at New Scotland Yard. It’s a collection of criminal memorabilia that’s been around since 1874. It was created to help police study crime and criminals, but is now an official museum although it’s not open to the public, unlike the Black Museum in our story.)

The first story is the dark and twisted tale of Dr. Dawson’s “Diagnoser.” Some alert fans may recognize the actor from The Entire History of You, but I think it’s safe to say he’s playing a different character now. This isn’t the first time Black Mirror has featured an actor twice. Now, he’s a doctor who starts out with plans only to help people, only to get twisted and mutated by a technology that leaves him a murderer and a vegetable. This gives us a window into the dark side of TCKR. Yes, they gave us San Junipero. But it came at a great, great cost in the form of technology that was used in ethically dark human experiments performed on people who couldn’t afford their own healthcare. (Read more about everything we learned about TCKR in Heavy’s story here.)

In the middle of watching #BlackMuseum episode of #BlackMirror4 and I'm severely traumatized. ?

Next we see the story of Jack and Kerry and the teddy bear. This technology was the immediate precursor of San Junipero’s tech. It was the low-fi version that transferred human consciousness into other brains and, eventually, into inanimate objects. (How on Earth did that work?) The tech was ultimately outlawed, but not until poor Kerry was stuck for the rest of her life in a teddy bear, only able to communicate with two emotions. It’s a heart-wrenching story and I have to wonder: why can’t she be transferred into San Junipero? Maybe it’s not possible, or maybe Rolo just wanted her in his museum and really didn’t care.

Finally, we learn about the main attraction of the Black Museum: Clayton Lee. He was accused of murdering a young woman (and yes, those were Clayton’s new stories that you saw in previous episodes this season.) He claims, however, that he’s innocent and DNA will exonerate him. But Rolo isn’t interested in that. He just wants to get a digital copy of Clayton at the time he’s being executed, for his museum. It’s so dark, it’s hard to fathom. Rolo even recognizes that cookies now have human rights because they’re believed to be sentient, but he ignores all that and tortures poor Clayton every day of his existence. Want a darker thought? This might be the real Clayton. We know that TCKR transfers a full consciousness, not just a digital copy, when a transfer is made as someone dies. So this is not only a copy (which would be dark enough) but poor Clayton himself, suffering and slowly being permanently mentally damaged by the torture.

Going into this, I had no idea that I was going to be watching a revenge film. But by the time they revealed where this was going, I was ready for it. Rolo needed to pay for what he has done. (And who knows who else has been tortured that we didn’t see.) Clayton’s daughter played Rolo the entire time. She poisoned the water she gave him early on and hacked the AC to make the building feel really hot, so he’d be compelled to drink a lot of the poisoned water. And then she made a digital copy of him as he died, to take with her forever. And all along, her mother’s consciousness was inside her head, using TCKR tech, watching the revenge and feeling very proud of her daughter.

She set everything on fire as she left, and it was beautiful and cathartic. She even cared enough to let Kerry-in-Teddy-Bear-Form watch her revenge and then take Kerry with her. (I loved the part where Kerry said: “Monkey Loves You!” after she got rid of Rolo.) This was a dark episode, but strangely enough it had a satisfying and happy ending. It’s the revenge movie you didn’t know you wanted in Black Mirror, and it was perfectly hidden under layers of world building that we’ll be analyzing for weeks to come. 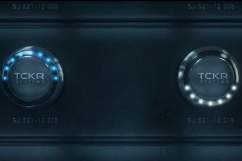