The last couple months have been both difficult and wonderful for Camille Grammer, who got engaged to her lawyer boyfriend David C. Meyer and underwent surgery for her second cancer diagnosis. Recently, Grammer went through surgery to remove cancer cells and revealed to Us Weekly that, “It’s a squamous cell carcinoma and it could show up on the skin or in your lungs, it could be in the back of your throat, in your vagina, in your labia, there’s many places it could show up. I had surgery three days ago and I’m out and about but I’m still healing and I’m still in some pain.” Just days after Grammer’s surgery, she attended the premiere for season 8 of Real Housewives of Beverly Hills. As for Grammer’s engagement to boyfriend Meyer, the two revealed their engagement online and then Grammer stated to People, “I know that he’s the right man for me. I just know it … I’m very blessed to have met the man of my dreams. I know that sounds really corny … But he’s handsome; he’s smart he’s supportive; he’s a great dad. I’m very impressed with his children and how he’s raising his children and his co-parenting. I was very impressed with his co-parenting skills with his ex-wife, and I’m very happy.”

Thank you Dr. Beth karlan for removing those pesky cancer cells. You are Amazing! This is my second cancer diagnoses. Thank God We found it early. (squamous cell carcinoma) *Early detection is key. My cancer was removed and I'm resting at home. Ladies listen to your bodies. If something doesn't seem right go for a checkup. Don't put it off. Annual check ups are important. @cedarssinai @foundationforwomenscancer #cancerwarrior #cancer #cancerawerness. ♥️THANK YOU EVERYONE for you kind words, support and prayers!

Besides being diagnosed with cancer previously and beating it, Grammer knew she was susceptible to cancer because of her family history. Her first diagnosis was with edometrial cancer, and she had said she wasn’t completely surprised when she found out she had it. In September 2013, Grammer was diagnosed with stage 2 cancer and, according to LifeScript, she had a hysterectomy before being treated with chemotherapy and radiation. Grammer told LifeScript about the day she found out she had cancer. Grammer stated that, I was shocked and numb. That day was surreal. Cancer had always been in the back of my mind because I had the genetic mutation. But I had still always hoped I wouldn’t develop it. I was alone when I got that news and just sat there in disbelief. I didn’t want to cry in front of the doctor and I tried to listen to him as he told me he didn’t know what stage I had. That couldn’t be determined until after my surgery.” Fortunately for her, Grammer’s cancer did not spread and she was able to battle through the disease to recovery. She later developed Camille’s Crusaders, her Foundation for Women’s Cancer.

Grammer’s mother is currently battling her third cancer diagnosis. In 2012, Grammer opened up to HealthLine about her mother’s triple cancer diagnosis of ovarian, colon and bladder cancer. Grammer revealed that, “My mom was diagnosed at the age of 46 with ovarian cancer and she was in late stage two, heading into stage three, and had a tumor about the size of a small grapefruit. So they opted for the full hysterectomy and during the surgery they realized that the cancer had spread to some of the lymph nodes on her abdominal region and area, so they had to remove that. Then she went through months of chemotherapy and radiation.” Fortunately, Grammer’s mother has been carrying on and has been able to continue her fight against the diseases. Grammer’s grandmother, on the other hand, lost her fight against colon and stomach cancer when Grammer was younger.

Me and my mother.. Raising awareness for #LynchSyndrome #cancerwarriors #cancer @aliveandkickndd Camille Grammer hoped to defy genetics and sidestep the gynecologic cancer that claimed her grandmother’s life and which her mom has battled for several years. But the reality star was diagnosed with endometrial cancer as her marriage fell apart. Now she’s talking about her life after a radical hysterectomy… Drama, gossip and cat fights are commonplace on the “Real Housewives” television franchise. Whether the scene is Orange County, CA; New Jersey or Beverly Hills, controversy and confrontation seem to follow the women whose lives are on display on the hit reality shows. But for Camille Grammer, one of the original “Real Housewives of Beverly Hills” cast members, the drama she lived through on camera was nothing compared with the challenges she faced once the cameras were off: Grammer was diagnosed with endometrial cancer in 2013. “It’s not like it was a surprise,” says Grammer, 47. “I knew I was at risk because of my genes.” *(Grammer’s maternal grandmother was diagnosed with cancer and her mother was diagnosed with ovarian cancer when Grammer says). “My mom was diagnosed with stage 3 ovarian cancer when she was 47.” Nearly a decade earlier, Grammer underwent genetic testing to find out whether she carried the genes that had put her mother and grandmother at high risk for the gynecologic cancer they got. “My mom’s oncologist suggested I get tested for BRCA 1 and BRCA 2,” she explains. “That involved answering a lot of questions and having what seemed like 8 vials of blood drawn for the tests.” – See more at: http://www.lifescript.com/health/centers/cancer/articles/camille_grammer_housewives_battle_with_endometrial_cancer.aspx#sthash.8Q5UwGY5.dpuf 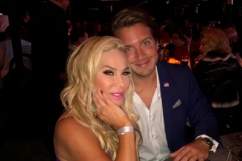