K-Pop rapper Heize was performing at the 2017 SBS Gayo Daejun in South Korea on December 25 when she collapsed on stage. Prior to her performance, Heize had been suffering from a sore throat.

Fans were shocked to see Heize fall to the ground while performing. Many have been sending her well-wishes on social media, hoping that she is able to get well soon.

Heize’s “busy schedule” has been blamed, and she may have been just pushed herself too much, not getting the rest that her body needed.

“It seems that Heize’s extremely busy schedule may have taken a toll on her health,” a spokesperson for Heize told Metro. Heize was taken to the hospital and evaluated by a doctor. According to the spokesperson, she will need to have surgery, but it’s unclear exactly why.

“Based on her diagnosis at the hospital, it has been decided that she will undergo surgery. For now, her progress must be observed, and it appears that she will be unable to move forward with her plans and scheduled activities for the immediate future,” the spokesperson added.

No further details about Heize’s condition have been released, but many fans think that Heize will have her tonsils removed. Based on her main symptom being a sore throat, it seems that this would make the most sense.

“With chronic, acute pharyngitis, granules may develop on the the back of throat or tonsils. It may require laser surgery to remove the granules, abscesses to be drained, or a tonsillectomy,” wrote another.

If Heize does require tonsil surgery, she should recover in one to two weeks. As for whether or not this type of surgery would have an affect on Heize’s ability to sing/rap in the future, The Chicago Institute for Voice Care explains that it shouldn’t.

“A singer’s perception of tongue position and mouth opening may change a little in the first week or so after having the tonsils removed, but these alterations fall into place and things will feels normal again. Most singers report feeling like they are able to sing higher and better with less effort. Complications may include temporary numbness of the tongue and scratches on the lips as well as possible damage to the teeth if they aren’t healthy. Complications such as severe scarring of the muscles around the tonsils, may result in leakage of air into the nose, but this is exceedingly rare and it can be corrected.”

Heize’s performance at the SBS Gay Daejun aired on television in South Korea on December 26. The ceremony was hosted by Yoo Hee-yeol and IU, and was held at the Gocheok Sky Dome in Gocheok-dong.

Heize is very popular in the K-Pop world. This year, she released several hit songs including, “You, Clouds, Rain,” “Don’t Know You,” and “Star.” She recently won the Best Vocal Performance Female Solo Award and the Best Hip Hop and Urban Music Award at the 2017 Mnet Asian Music Awards.

Heize’s hospitalization comes just one week after K-pop star Kim Jonghyun died. On December 18, the lead singer of SHINee was found unconscious at an apartment in Seoul. He was rushed to a nearby hospital where he was pronounced dead. His death is being looked at as a suicide. 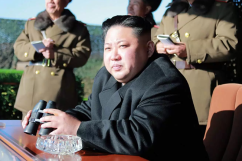