Still crying ? every part of this night has been perfection just like you @mrtankcook I love you forever!

Kaley Cuoco is engaged! Cuoco’s boyfriend, Karl Cook, proposed to her on her birthday and she posted a video of the happy occasion on Instagram. As you can see in the video above, Cook’s proposal was a complete surprise to Cuoco, who simply couldn’t stop crying.

“Honey? What’s on your finger?” Cook asks Cuoco, as she is doubled over in tears. She then holds her hand up to show off her new engagement ring.

“Yes! I say yes! I say yes!” Cuoco exclaims. Her reaction is met with laughter, presumably from friends who had gathered at her home to celebrate her special day.

Several people have commented on the video, wishing Cuoco and Cook all the best.

“I knew he was building up to something! You always seem so happy when you’re with Karl. Congrats,” wrote one Instagram user.

“Omg congrats. Cried so much lol. So happy for you,” added another.

“I’ve watched you guys grow into an amazing couple!! I can’t think of 2 people more deserving of such happiness,” wrote a third.

“Well after nearly two years I finally got up the courage to ask her to marry me. This is the best night of my life and I think the video shows it is the best night for Kaley as well… of she said yes,” he wrote. He also shared a photo of the stunning engagement ring that he chose for his soon-to-be wife. You can check out that photo below.

I am so so so happy. Thank you @nadis_diamonds for making the greatest ring I could hope for. Absolutely brilliant. Thank you thank you

A short time before actually popping the question, Cook teased Cuoco with a fake ring while the two were shopping at Target. While it seems as though she didn’t expect that she’d get engaged hours later, Cuoco’s face in the snap is pretty priceless.

On my loves birthday I got her everything she has always wanted….now judging by her face maybe not, it's the thought that counts right???

Cuoco, who was previously married to Ryan Sweeting, has been dating Cook for two years. She took the relationship public when she shared a photo of her and Cook on Instagram in March 2016, after Cook won the $50,000 Card Flex Grand Prix. A few months later, Cuoco and Cook made their first official public appearance at the Longines Masters Los Angeles Gala.

Over the past two years, Cuoco and Cook have bonded over their love of horses and horse riding. They have both been supportive of each other’s respective careers, Cuoco constantly attending competitions and other events, showing love for her professional equestrian beau.

No word just yet on when these two lovebirds plan on tying the knot. 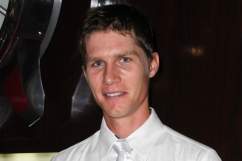