Actress Kate Winslet is making headlines today after sharing (or oversharing) some details on her co-star, Idris Elba. The two worked together on The Mountain Between Us, which was released back in September.

In the movie, Winslet and Elba had a sex scene. During filming, Winslet says that Elba was “nervous” and she had to be the voice of reason in order to get the scene done. In a recent interview with The Graham Norton Show, Winslet decided to tell all about her on-screen partner’s bedroom fetishes.

“I had to get quite bossy. I’ve done quite a lot of these scenes before and poor Hany was really quite nervous and had an extensive shot list and I thought, ‘We are never going to get this done.’ Idris was a bit nervous too and everything was moving a bit slowly so I just said, ‘Okay boys, this is what we are going to do…’ We just got on with it. We got naked but Idris asked me to keep my socks on. I thought he didn’t like feet but, it is the opposite: Ladies and gentlemen, Idris loves feet,” Winslet shared.

In order to make their on-screen romance look believable, Winslet wanted to spend a lot of time with Elba. The actress said that she told her co-star that she wanted to get to know him and explained that the two ended up having a close-to-real-life relationship (without actually dating) in order to achieve that goal.

Elba had a similar idea. He wanted to make sure that his connection to Winslet was “authentic,” according to The Sun.

“And she said, ”Yes! That’s the way to do it, otherwise it just comes across as fake,'” he explained.

The film didn’t get great reviews and many movie critics didn’t feel that strong of a connection between Alex (Winslet) and Ben (Elba). Despite the two trying their best to make it work, many felt that their on-screen connection was forced, perhaps because of the writing.

“I liked that there seemed to be no lovey-dovey business at this point. But then Alex looks through her camera lens and sees a metallic glint off in the distance. Off they go with their makeshift emotional therapy dog in tow and the days-long trek forces them to cuddle against the cold at night. And, all too soon, the movie takes a tumble from which it never recovers,” writes Roger Ebert reviewer Susan Wloszczyna, giving the film two stars.

Regardless of the negative reviews and limited theater engagement for this film, both Winslet and Elba have millions of fans. Many in Elba’s fanbase find him wildly attractive, and would appreciate his sex scene, which could be why Winslet’s TMI interview has gone viral.

You can watch the film’s trailer below. 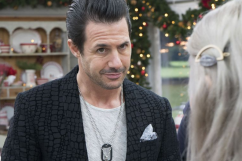 Is ‘The Great American Baking Show’ on Tonight?