The 2017 Kennedy Center Honors air tonight at 9 p.m. ET/PT on the CBS network, with five honorees this year with major star power. The event took place on December 3, 2017 and was taped, so tonight’s showing is not live. Several of tonight’s honorees have voiced that they are glad Donald Trump will not be in attendance at the event. According to CNN, this is the first time that a current president will not be present in over two decades. On the red carpet at the event, honoree Gloria Estefan said that she was happy he was not in attendance so that guests could focus on the arts and the people who are being celebrated. To get to know more about Estefan’s honor, tonight’s performers for each honoree and the run of events, read on below.

Grammy-winning singer Gloria Estefan, known for “Conga” and many other hits, is an honoree tonight. Actress Eva Longoria and Jon Secada will deliver spoken tributes about Estefan and there are several musical tributes for Estefan as well. The Cast of “On Your Feet! The Musical” will sing “1, 2, 3”; Chaka Khan is performing “Coming Out of the Dark” with the Howard University Gospel Choir; Becky G is singing “Mi Tierra”; Estefan’s daughter Emily Estefan will perform “Reach”; and Miami Sound Machine will sing a blend of “Rhythm is Gonna Get You”,“Oye”, “Conga”, “Turn the Beat Around”, “Everlasting Love” and “Get on Your Feet”.

Lionel Richie is a GRAMMY Award, Academy Award and Golden Globe Award-winning music legend, who is an honoree at the event. His daughter
Nicole Richie is delivering one of the spoken tributes tonight. Others who are speaking are singer Kenny Rogers and Quincy Jones. Music artists who are giving performances in tribute to Richie include Steve Wonder performing “Hello” and “Easy”; Luke Bryan singing “Penny Lover” and “Sail On”; and Leona Lewis delivering “Say You Say Me” and “All Night Long”. There is also a finale performance for Richie, which will include all of Richie’s tribute performance and will be a reprise of “All Night Long”.

Actress, dancer and choreographer de Lavallade is an honoree this year and she reportedly threatened to boycott the event if Trump were to attend, as did Norman Lear. Years ago, de Lavallade was Meryl Streep’s teacher, so Streep is delivering a spoken tribute. Ballet dancer Misty Copeland is also giving a spoken tribute. As for the performances, they include Jon Batiste in “Soul Bossa Nova” with dancers Stella Abrera and Brandon Victor Dixon; Sheléa Frazier performing “Wade in the Water” with dancers Alicia Graf Mack, Linda Celeste Sims and Matthew Rushing; vocalist Jacqueline Bolier for “Deux Bourées: N’aï Pas léu De MîO” with dancer Lindsey Croop; singer Rebecca Luker performing “Bill” with dancers Misty Copeland and Tony nominee Robert Fairchild; and a finale performance of “He’s Got the Whole World in His Hands” featuring all of the Carmen de Lavallade tribute participants and the Howard University Gospel Choir, according to CBS.

LL Cool J is a hip-hop artist, rapper, actor, author and businessman, who is accepting a recipient at the Kennedy Center Honors. Queen Latifah and Ahmir “Questlove” Thompson, of The Roots, are executing the spoken tributes for LL. Meanwhile, the performances will be given by DJ Z-Trip; Busta Rhymes with a performance of “Mama Said Knock You Out”; MC Lyte singing “I’m Bad”; Tariq “Black Thought” Trotter performing “It Gets No Rougher”; and Darryl “D.M.C.” McDaniels with “Rock the Bells”. 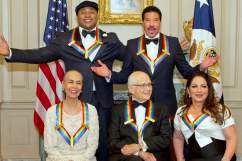