Kyle Richards and her husband, Mauricio Umansky, had their Encino, California, home broken into on Wednesday night. The Real Housewives of Beverly Hills stars have been vacationing in Aspen, Colorado, for the holidays, and were not at home at the time of the break-in.

According to TMZ, the thieves were able to enter the home after breaking a window. Law enforcement says that the burglars were able to steal “more than a million dollars in jewelry.” The report also indicates that over $150,000 worth of watches were stolen in the heist.

Although police have yet to apprehend the suspects, they feel confident that they will be able to identify those responsible thanks to several surveillance cameras located inside the home. Interestingly, a “family source” told TMZ that this could have been an “inside job,” as Richards and Umansky are renovating the home and several people have been coming and going.

“One family source tells TMZ they suspect it could be an inside job because a number of people had access during the construction.  We’re also told the burglars did not ransack the house and knew exactly where they would find the jewelry.”

Richards and Umansky had thought about moving for quite some time. In fact, on a recent episode of the Real Housewives of Beverly Hills, Richards talked about her husband wanting her to look at various real estate listings (he is the founder and CEO of high-end real estate brokerage The Agency), but said that she wasn’t ready to move. However, that recently changed and Richards and Umansky left Beverly Hills for Encino after being “completely blown away” by this particular house.

“It was actually one of my husband’s listings, and I said to him, ‘I wanna go look at this house to look at the floors,’ because I was redoing my floors at the time … It’s not like anything you would see in Los Angeles normally, and I just fell in love and my husband did too,” Richards told People Magazine earlier this month.

The estate once belonged to legendary recording artist Smokey Robinson, who sold the property back in 2002. Sitting on 1.54-acres, the stunning 10,000+ square foot home boasts seven-bedrooms and eight-bathrooms.

“Crafted to preserve the integrity and intrigue of this landmark estate, the design team attended to every interior detail, meticulously selecting the finest materials and tradesmen to execute their vision, and deliver simply divine aesthetics, comfort and satisfaction. The main residence offers seven bedrooms, with three en-suites adjacent to the spectacular master suite, which has an approximately 800 square foot exterior balcony to overlook the entire property, with no neighboring structures in sight. The home theater and two powder rooms complete this seamless space, with too many architectural details to mention, including eight working fireplaces. A brand new pool, a lovely picnic gazebo, a running creek, and a newly built 1,600 square foot guest house,” reads The Agency’s listing for the home, in part.

The couple dropped $8.2 million on the home back in October.

Neither Richards nor Umansky have commented on the burglary at this time. 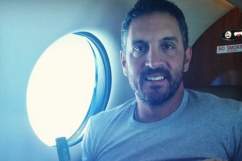 Read More
Kyle Richards, Real Housewives
Kyle Richards and Mauricio Umansky's home in Encino was hit by burglars. Over $1 million worth of jewelry was stolen.