LL Cool J has been married to his wife Simone Smith since 1995 and together, the couple has four children. In an interview on Jimmy Kimmel Live, LL Cool J recalled the moment he saw Smith for the first time. He remembered, “I was just 19, something like that. It was Easter and I was driving down the block in my mother’s car.” In an interview with Oprah Winfrey, wife Simone Smith talked about the secret to having a successful marriage. Essence reports Smith saying that the keys are, “Definitely putting God first. We both definitely come from a spiritual background and there’s a lot of compromise. Picking your battles [and] respecting each other.”

Over the years, the couple has had to deal with the ups and downs of life, even cancer. When Smith found a lump on her leg and was diagnosed with bone cancer, LL Cool J said, “You don’t abandon someone in that foxhole, you know. You got to be there in that foxhole with them. So I made some decisions professionally and decided to be by Simone’s side during that period.” The Christian Post reports that Smith overcame her cancer with a lot of prayer. Smith explained, “Back in 2004, I had a very invasive surgery done because they found a chondrosarcoma tumor in my tibia bone. So I had an invasive surgery called microvascular reconstructive surgery, and they had to remove my whole tibia bone and replace it with my fibular bone from my left leg … It took me almost 2 1/2 years to learn how to walk again. I fought through it, so I was a little depressed for like about…two weeks…but my grandmother called me up and told me, ‘you better not be depressed and get prayed up for those doctors who are doing this surgery on you and you’re gonna beat this.’ So I prayed to God and since then my test results have been great.” As of 2013, Smith said she has been cancer-free for nine years.

LL Cool J has three daughters and one son – Nina, Samaria, Italia and Najee. Nina Simone Smith is 17 years old, Samaria Leah Wisdom Smith is age 22, Najee Laurent Todd Eugene Smith is 28, and Italia Anita Maria Smith, who is 26 years old. This past May 2017, when daughter Samaria graduated from The Fashion Institute of Technology’s 2017 Commencement Ceremony at Arthur Ashe Stadium, she wasn’t the only one celebrating an accomplishment. Sandra Rose reports that at the ceremony, LL Cool J was honored with the school’s President’s Award for Creative Excellence. In addition to Samaria graduating this past May, daughter Italia also had a big moment in that time. Essence reports that Italia tied the knot in June 2017 and sister Samaria was her maid of honor. Son Najee Laurent Todd Eugene Smith was arrested and charged with criminal trespassing after an altercation in NYC in 2015, according to E! News.

26 days till my sister is a Wifey? beyond excited for this new chapter of your life. Thank you for showing me what a relationship is supposed to be and how God must be in it. & making me your maid of honor and allowing me to be apart of designing your gown with @karensabagofficial for your special day. I love you. #TLC2017❤️? 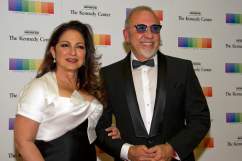