Mauricio Umansky is the husband of Kyle Richards, star of Bravo’s The Real Housewives of Beverly Hills. According to Celebrity Net Worth, Umansky has an estimated net worth of $40 million. Meanwhile, The Richest estimates his net worth at $100 million.

Aside from making semi-regular appearances on Housewives alongside his wife, Umansky runs an uber-successful real estate company, which lists high-end, luxury homes in various parts of the world (including Mexico, Turks and Caicos, and Los Angeles).

Umansky married Richards in 1996 and they are proud parents of three daughters, Sophia, Alexia, and Portia. Richards also has a daughter, Farrah, from a previous marriage.

1. His Encino $8.25 Million Mansion Was Hit by Burglars on December 27 & Over $1 Million in Jewelry Was Stolen

On Wednesday, December 27, police say that burglars entered Umansky and Richards’ Encino home and stole over $1 million worth of jewelry. According to TMZ, thieves broke into the home after 1 a.m. local time, grabbing several items, including $150,000 worth of watches. An arrest in the case has not yet been made.

Umansky and Richards purchased their new home in October, dropping a whopping $8.25 million on the colonial-style abode. Not only that, but the couple has decided to renovate the home, spending additional money to make it their own.

According to the listing, which was held by Umansky’s company The Agency, the 10,600 square foot home boasts seven bedrooms and eight bathrooms and sits on 1.54 acres. The stunning white mansion is complete with “three en-suites adjacent to the master suite, which has an approximately 800 square foot exterior balcony to overlook the entire property, with no neighboring structures in sight. The home theater and two powder rooms complete this seamless space, with too many architectural details to mention, including eight working fireplaces. A brand new pool, a lovely picnic gazebo, a running creek, and a newly built 1,600 square foot guest house.”

Umansky co-founded The Agency in 2011. Since that time, the company has sold more than $9 billion worth of real estate, making it one of the most successful brokerage firms in the United States.

Umansky partnered up with his father, Eduardo Umansky, as well as design and architectural specialists Billy Rose and Blair Chang, to get The Agency off the ground.

“The Agency is a full-service, luxury real estate brokerage and lifestyle company representing clients worldwide in a broad spectrum of classes, including residential, new development, resort real estate, residential leasing and luxury vacation rentals,” reads part of the company’s description on its website.

Currently, one of the company’s most exclusive properties is a 12-bedroom, 23 bathroom compound called Palazzo di Amore, located in Beverly Hills. The home is listed for $129,000,000.

Over the years, Umansky has listed homes for several celebrities, including Lady Gaga, Michael Jordan, and Arnold Schwarzenegger.

3. He & Richards Listed Their Former Beverly Hills Home for $6.99 Million

Umansky had been asking his wife to look at some of his listings over the past year or so, in hopes of finding a new home for them to move into. After months of not having any luck, Umansky found a home that he and Richards fell in love with. The couple moved to Encino, leaving Beverly Hills behind — and putting their former abode on the market.

Umansky and Richards have listed their Beverly Hills home for $6.99 million, with a $50,000/month option to rent, according to Mansion Global. The couple purchased the 6,000+ square-foot home in 2011 for $3 million.

The Agency is carrying the listing, with the primary contact on the estate being Richards’ eldest daughter, Farrah Aldjufrie.

Below is the home’s description.

“Two en-suite bedrooms and private maid’s quarters grace the downstairs, while a second story holds four generous bedrooms, one of them being used as a fabulous custom dressing room, plus an office. The voluminous master suite with a private balcony overlooks the pool and grounds below, showcasing soaring, vaulted and exposed beam ceilings, wide plank hardwood floors, a stunning marble bathroom and dual walk-in closets.”

“An expansive backyard with a large swimming pool and spa, dining and lounge terraces, grassy lawn, lighted sports court and putting green completes this unparalleled luxury offering in one of the city’s most prestigious enclaves.”

Additionally, Richards and Umanksy worked with longtime friend Faye Resnick who is responsible for the home’s impeccable interior design.

Umansky and Richards also own a home in La Quinta that they purchased back in 2014.

4. He’s Been Known to Take His Family on Lavish Vacations — on Private Jets

Umansky definitely works hard, but in recent years, he has played harder. He is known to take his family on fairly extravagant trips, most recently to Aspen, Colorado, where he, his wife, and their daughters spent time skiing and snowboarding.

“We are taking our kids skiing in Aspen. I’m more of a Vail girl, because I feel like Aspen is just like being in Beverly Hills — so I like to get away. But my girls like to see all of their friends there, so we caved last year and we’re going again this year. Aspen it is,” Richards told Jet Set.

Over the summer, Umansky and Richards treated their family to a luxurious vacation in Europe. They boarded a yacht and spent several days on the water, visiting exotic locations, such as Mykonos (an island in Greece) and Dubrovnik (a city in southern Croatia). Richards and her daughters documented their trip on social media for all to see (and envy).

In 2016, the Umansky-Richards clan traveled to Italy for another enviable vacation. The family of six spent time on a yacht and visited the Amalfi Coast. They also spent time in Rome, taking in some of the most incredible, historic sights.

In 2015, the family visited Portofino, Italy, and St. Tropez. They even stopped in Monaco for some additional adventure. Check out some of their photos below.

Perfect evening with my family at Hotel Du Cap

As for what might be in store for 2018? Richards said that she’d like to go to Thailand.

“I really want to go to Thailand. I’ve never been, and that’s a place I’ve always wanted to go. I’ve seen beautiful photos — it just looks really beautiful. And I like the food, so why not?” Richards told Jet Set a few weeks ago.

Umansky broke into the real estate business several years ago, but it wasn’t actually his first passion. He has always had a thing for fashion and decided to start his very own clothing company after graduating from college. The company ended up being rather successful and Umansky was able to sell it for a profit — and turn that money into something bigger.

“I started a clothing company called 90265 out of college, and that did quite well—I started the fad of oversized T-shirts on girls wearing leggings. At 26, I sold the company and had to figure out my next life,” Umansky told Worth back in 2014. “I have always had a love of sales and a love of architecture, and the combination brought me into real estate. My first job was at Hilton & Hyland, a boutique firm in Beverly Hills co-owned by my brother-in-law, Rick Hilton,” he added.

Interestingly, it was his wife’s ex-husband, Guraish Aldjufrie, who afforded him his very first home sale. Umansky listed — and sold — Aldjufrie’s Brentwood mansion for $7.5 million.

“My first year at Hilton & Hyland, I earned over $200,000 in commissions. I became their number-one agent and was for eight or nine years straight. They had about 100 agents and I was doing 20 percent of their sales,” Umansky told Worth. 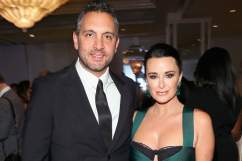 Read More
Kyle Richards, Net Worth 5 Fast Facts, Real Housewives
Mauricio Umansky is the co-founded of The Agency. He has an estimated net worth of $40 million. Here is what you need to know.