The 1983 movie A Christmas Story was narrated by Jean Shepherd, who played the voice-over role of an adult Ralphie Parker. Today, FOX has come out with a live television production of the film. In A Christmas Story Live, the narrator is shown to viewers and is played by actor Matthew Broderick, who first became famous for his lead role in Ferris Bueller’s Day Off. Broderick went on to star in numerous films and Broadway productions. He also has a few Tony awards under his belt.

When talking with Entertainment Weekly about his connection (or lack thereof) to the movie A Christmas Story, Broderick recalled, “I was a little old for it [growing up] — it wasn’t a family thing for me to watch that movie, but I definitely knew it and loved it. And I knew some of [author] Jean Shepherd’s [adaptations] from before that. On PBS there were a couple, and my father [actor James Broderick] played the “old man.” So I knew those really well, and I always loved them, and I met Jean Shepherd when I was young … It’s one of those Christmas stories that’s sentimental and all that, but also shows some of the less perfect parts of Christmas, which is a big release to see dramatized because you don’t always see it in the movies.”

Maya Rudolph, who many know from her Saturday Night Live days and starring role in Bridesmaids, comes on board in the role of Mother, aka Mrs. Parker. In a joint interview with Broderick, she also talked to Entertainment Weekly about not experiencing the original Christmas Story film as a kid. She revealed, “I fell into the movie on my own. It was never a household Christmas tradition or anything, but I felt like I discovered it enough on my own that it felt a bit darker and more my sense of humor. I love Melinda Dillon [as the mother] in the movie so much. I didn’t expect to ever play her part in the musical, but she really shines for me in that movie. She’s just wonderfully warm and a little bit her own odd, quirky mother that’s not a normal mother but is a normal mother.” Melinda Dillon went on to carry out more acting gigs after playing the mother in A Christmas Story, but she reportedly carried on a private personal life, according to AChristmasStoryHouse.com. Her last known acting roles were as Ginger Templeman in Reign Over Me and on the TV show Heartland as Janet Jacobs.

When it comes to the change of viewers being able to actually see the narrator, Maya Rudolph has said, “What’s nice about it is, we get to see [Broderick’s] face and so it’s a delightful connection to the Narrator because it actually is delivered through those interesting, charming, personable characters that the voice from beyond from the original movie doesn’t [have]. I mean it has its own flavor, but it’s nice that we’re actually seeing all these words being spoken at us.” Having the narrator present doesn’t mean that he’ll be involved with the other characters. Broderick will not be interacting with the others.

This is just one of the differences between the live production and the film. Even so, executive producer Marc Platt says that the crew on A Christmas Story Live has made sure to keep the most iconic parts of the movie included in the live production. Platt told Broadway World that, “The challenge of adapting something so beloved is to be sure that you be respectful of the original material, and that you are delivering for an audience all the elements that people who love the film need to see to be satisfied. And the same with the musical. You have all these great musical moments and beautiful score to land, but also want to deliver an experience that is unique, that no one has ever experienced before in this new genre of a live television version.” Tune into the FOX network at 7 p.m. ET/PT and 6 p.m. CT to check out A Christmas Story Live. 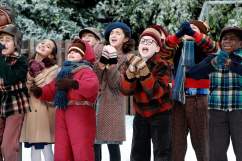