Tonight, the top 10 contestants from The Voice season 13 perform at during tonight’s live show. The remaining contestants on Blake Shelton’s team include Red Marlow, Keisha Renee and Chloe Kohanski. Adam Levine’s performers are Adam Cunningham and Addison Agen, while Miley Cyrus’ remaining singers are Brooke Simpson and Ashland Craft. Lastly, Jennifer Hudson’s contestants are Shi’Ann Jones, Davon Fleming and Noah Mac. Adam Cunningham was previously on Blake Shelton’s team, but he was later stolen by Adam Levine. Cunningham is a hands-on dad of a baby daughter and he works in music at the studio where Blake Shelton actually got his start. Singer Janice Freeman is a strong woman who has dealt with many ups and downs in her life. She had her daughter at the young age of 21 and, when Freeman’s daughter was just four years old, her child’s father died of cancer. Unfortunately, Freeman was sent home last week and Adam Cunningham has now been in the bottom of the votes twice. Contestant Addison Agen is a favorite this season and she started out on Miley Cyrus’ team, but she ended up with Adam Levine as a coach. For her blind audition, she performed the song “Jolene,” which is a special favorite of Cyrus’, so it made sense for the two to work together. Adam Levine also turned his chair around during Agen’s audition.

Chloe Kohanski is another fan-favorite this season and she recently gushed about her coach Blake Shelton to Hollywood Life. Kohanski stated that, “What you see is what you get with Blake. He’s always the same. He treats the guy who puts electrical tape on the ground the same as the producer of the show. That’s how I want to be. Watching Blake perform, he’s very comfortable. It looks very second nature to him, and I want to get to that point where I am not nervous or doubtful of myself. Where I can just get out there and do what I’m supposed to do.”

As the contestants perform tonight, at-home viewers will be able to cast their votes for each of their favorite artists. In addition, tomorrow, the results will be in and fans will also have the opportunity to save one of the artists with an “Instant Save”. Check out the voting methods available to cast your votes and learn how to execute each one below.

Click here to vote for your favorite contestants on The Voice via the official NBC website. With this method, you can vote up to 10 times per performer and per email address. You can also vote via Facebook by clicking here.

In order to vote using The Voice App click here to download it. The site allows you to download the app via Google Play, the Windows Phone Store and the Apple Store. During the live shows, you can start voting as soon as the show starts. And, on results nights, you can instantly SAVE your favorite contestants with a “tap-to-tweet” straight from the app. Again, the limit is 10 votes per contestant and per email address. App voting is available in all states in the U.S. for people over the age of 13.

You can also vote for contestants by downloading their “eligible songs” on iTunes during the voting period. Each individual song download counts as one vote. And, if any of the artists make it into the top 10 of iTunes’ Top 200 Singles, they get a bonus, which multiplies their iTunes votes for that song times ten.

If you’d like to check out tons of extra info on the show as well as the voting methods, click here. And, for even more details on the rules and guidelines of The Voice voting, click here. Tune in at 8 p.m. ET/PT (time delayed) tonight on the NBC network to watch The Voice. 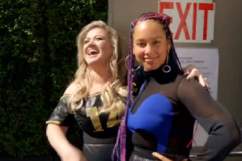 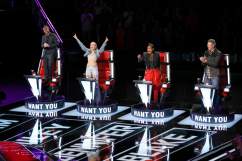 ‘The Voice’ Season 13 Live Stream: How to Watch 2017 Premiere Online