Something completely unexpected happened at the end of The Walking Dead tonight. Even comic book readers weren’t prepared for this one. And most fans are now heartbroken, devastated to know what’s in store for them. And they’re quickly sharing their heartbreak on social media, letting the world know how they feel. There are major spoilers for The Walking Dead midseason finale below. Don’t read on unless you’ve already seen the finale and know what happened. Read on for the best memes, tweets, and reactions to THAT finale.

Yes, tonight we learned at the end that Carl had been bitten by a walker. He’s going to die. And fans aren’t happy. They also are mad that they’ll be waiting until the end of February to find out what’s next.

Noooooo why did they have to kill Carl!!! ?????The walking dead has got me fucked up rn #TheWalkingDead pic.twitter.com/ukhOiM1uso

Some fans aren’t ready to let go, however. Could we get a dumpster moment?

How are we going to survive waiting until February?

Yoo the walking dead can’t end like this! #TheWalkingDead pic.twitter.com/t9nthIXRAW

Rick when he arrives at Alexandria #TheWalkingDead pic.twitter.com/I3t3O99vkl

Maybe we should take off work tomorrow.

#TheWalkingDead Me calling off work tomorrow to gather my thoughts #TWD pic.twitter.com/FZ8jPQOhcE

CARL IS IMMUNE. LET’S SAY IT TOGETHER. #TheWalkingDead pic.twitter.com/TGZvEwIhjJ

Carl had been there since the very beginning.

By the way, Chandler Riggs left us a message on Twitter:

you’ll hear from me soon. 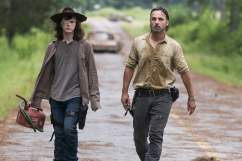