Hallmark’s newest Countdown to Christmas movie, Christmas in Evergreen, wasn’t filmed where you might think. The movie, originally called “Snow Globe Christmas” or “Snow Globe Wishes,” takes place in a small town of Evergreen, Vermont, according to press releases from Hallmark, where a veterinarian wishes for her most romantic Christmas ever. But this movie isn’t filmed in Evergreen. In fact, most Hallmark Christmas movies aren’t actually filmed in the fictional towns where the movie took place.

The Hallmark movie Christmas in Evergreen was filmed in locations in British Columbia, Canada from late September through October 6. Some of the specific locations where the movie was filmed include Clayburn Village in Abbotsford, Deer Lake Park in Burnaby, Burnaby Village Museum at Deer Lake Park, a school in Clayburn Village, Burnaby in BC, Langley in BC, and Hopcott Farms Weddings and Events in Pitt Meadows. (As an interesting note, Finding Santa was filmed around the same time in Pitt Meadows too. Other Hallmark movies filmed in BC this year included Mistletoe Inn and A Gift to Remember.)

Although the movie was filmed in September and October, some of the locations look like they have absolutely wonderful events around Christmastime of their own. Here are some scenes from Clayburn Village at Christmastime in 2014:

Welp, that's a show wrap for me on @hallmarkchannel's #ChristmasInEvergreen 🎄✌🏽!! 👈🏽swipe for some fun pics n clips of #SetLife #shenanigans ❤️ i've had so much fun up here visiting my old 21 Jump Street stomping grounds. I'd forgotten how breathtaking this city is.🇨🇦❤️Sending big hugs to the gracious and super fun actress @theeashleywilliams and director Alex Kamm as well as the entire cast and crew! Can't wait to come back up here at the end of the month to shoot my new @hallmarkmovie #MorningShowMurders 🖤🖤

Look at the beautiful home in Langley, BC, all decked out for Christmas in Evergreen:

And this one is just really funny: 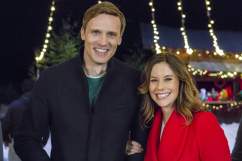 Read More
Christmas, Hallmark, TV
Find out all about where Hallmark's Christmas in Evergreen was filmed, and how you can visit some of the locations too. Was it filmed in Vermont?