Many of your favorite holiday movies aren’t actually filmed near the fictional towns where the story takes place. This is true of numerous Hallmark Christmas movies, and it’s also true of Netflix’s original Christmas movies this year. Christmas Inheritance takes place in the town of Snow Falls, where Ellen Langford must deliver a Christmas card to her dad’s former partner. But the movie wasn’t actually filmed in a town called Snow Falls. In fact, it wasn’t even filmed in the winter. But there is a very special bed and breakfast you can visit if you want to relive the film for yourself. Read on for more details.

Christmas Inheritance was filmed in North Bay, Ontario from March 24, 2017 to April 8, 2017 and Niagara-on-the-Lake earlier in March. The Grand Victorian bed and breakfast played a starring role for many Snow Falls shots, with Old Town standing in for Snow Falls in many scenes. The production crew put a lot of work into giving this springtime movie a beautiful, wintry feel that we’ve come to love in holiday films. (Interestingly, just about 10 days before the movie filmed, a big snowstorm hit nearby.)

One of the biggest filming locations for Christmas Inheritance was The Grand Victorian in Niagra-on-the-Lake in Ontario. Eva Kessel, owner of the Grand Victorian, said she was first approached about using the bed and breakfast for the film in January, and they began shooting the exteriors in March 2017. The Grand Victorian’s Facebook page shared photos from the filming in April.

One of the ways they created snow in the spring was by using snow blankets that looked very realistic. The Grand Victorian owner told Niagra This Week: “They literally rolled out snow blankets all over the front lawn, on the roof and in the flower beds. It was pretty surreal.” After exterior shots were filmed, the cast arrived for dialogue scenes and interior scenes.

And this is how they created a nighttime feel at the Grand Victorian during the day:

You can learn a lot about how this movie was filmed and what went into the filming by looking at some of the casting calls that were put out for the movie. Here, CastNorth requested extras that included a male age 18-65, a female age 18-65, and children and teens ages 6-17, and one female child with blonde hair age 5-7. The extras were needed April 1, 4, and 8, and adults would be needed for a full day of shooting lasting at least 12 hours. Around the time the movie was filmed, Hideaway Pictures posted a request for a big freezer to store ice sculptures in the North Bay area. Was this connected to the movie?

Fans are already loving the movie. Some say it’s the perfect role for Eliza Taylor, and her character is “cute, amazing, and funny.” Other fans rated the movie 100/100. “Her and Jake are perfect together. Gray was cute and all but a bit of a douche… All in all I watched it twice and it’s now my favourite Christmas movie,” said @octavia_100_fanpage.

Here are some photos from the movie:

#christmasinheritance Amazing movie 100/10 she is such an amazing actor. Her and Jake are perfect together. Gray was cute and all but a bit of a douche. All in all I watched it twice and its now my favourite Christmas movie. @elizajaneface

Go watch Christmas Inheritance guys! It's such a beautiful movie and Eliza is amazing in it!☺❤? #christmasinheritance #elizataylor

And here are more photos from the filming, including the fictional town of Snow Falls: 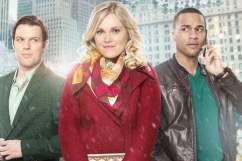