The most beautiful thing you can wear is confidence.??

A post shared by Alabama Luella Barker (@alabamaluellabarker) on Aug 8, 2017 at 5:19pm PDT

Alabama Luella Barker is the 12-year-old daughter of Travis Barker and Shanna Moakler. The youngest Barker has followed in the footsteps of her famous parents, doing some modeling and even releasing her own music. In October 2017, she put out her first single, “Our House,” a fun, pop-dance track that she co-wrote.

“It’s been very fun. My favorite thing about [“Our House”] is that it’s very fun, but chill at the same time. I actually co-wrote [the song] with Rachel West, my dad and John Feldmann. [My dad] helped me learn about music a lot, and also just watching him on tours always made me more confident and happy,” she told Entertainment Tonight a few months ago.

On January 10, the pre-teen’s name was brought up when her Instagram photos were displayed in a YouTube video that has been circulating online. The video, however, has nothing to do with Alabama Luella.

The video was posted on YouTube a few hours ago and has been viewed over 30,000 times. You can watch it here. Dawson has since posted an apology and an explanation on Twitter.

“Back in the day, 2008 to 2012-ish … I loved the feeling of making somebody shocked and laugh because they couldn’t believe what was coming out of my mouth. I wasn’t confident enough to make smarter jokes,” Dawson recalled in his apology video.

He goes on to tell the story behind the podcast. He said that he met a child — a 6-year-old — who had been wearing a lot of makeup. The youngster was on Instagram and was posting “really creepy selfies” that her dad was “helping her” with. Dawson went on to say that he talked about the girl on the podcast and then he started making jokes about it. He admitted to saying that the girl was “sexy,” but said that he would say things like, “I’m just kidding,” right after — but those comments were removed from the video.

Below are some photos of Alabama Luella Barker, whose name was not spoken by Dawson.

A post shared by Alabama Luella Barker (@alabamaluellabarker) on Jan 5, 2018 at 3:48pm PST

Don’t do something if it doesn’t make you happy ❤️ 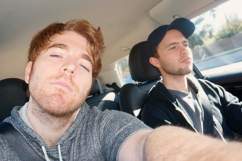