Beth Chapman of Dog the Bounty Hunter fame wrote an emotional post to caption a photo on Instagram to kick off the new year.

The reality star had a tough 2017 as she was diagnosed with Stage II throat cancer.

“A stage II throat cancer tumor has grown larger but still remains within the throat. There is no evidence of spread to lymph nodes or distant sites,” Cancer Center reports.

Chapman was forced to undergo surgery to remove a plum-sized tumor from her throat. According to The Blast, the surgery lasted 12 hours.

“We’re told the Chapmans are worried about the prognosis and are anxiously awaiting the pathology results to see if she’s out of the woods,” The Blast reported just after Chapman’s surgery.

At the time of her diagnosis, Chapman said that her doctors gave her a 50/50 chance of survival. This is something that she shared on the 2-hour television special that aired on A&E in November 2017.

Thankfully, doctors were able to remove the tumor successfully, and Chapman was given a clean bill of health ahead of the holidays. Nonetheless, the frightening diagnosis was a real wake-up call for Chapman, who has a new lease on life now that she is officially cancer free.

For the past several weeks, however, Chapman has been posting regularly to social media, making sure that she covered up her neck so that people couldn’t see her scars. In all of her selfies, she has either be wearing a necklace or shirts that had extra fabric at the top to cover up her neck. She wasn’t completely comfortable letting people see the scars left behind following her surgery, but that all changed on the first of the year.

On Monday, Chapman took to Instagram to show off her “battle scars,” a brave move that was appreciated by thousands of her fans. She decided to be vulnerable in her post, sharing something that is very personal.

“Embracing the unembracable (sic) #newbeginnings #newyear Prior to my surgery I had no lines no wrinkles a perfect neck if you will. It has been very hard to look at this in the mirror, it serves as a constant reminder of something I’d love to forget. However some life lessons you should never forget only learn from them and learn to embrace them so today I reveal my worst battle scar and know that things will get better in #2018 #secondchances #DogandBeth #battlescars,” Chapman captioned the photo below, exposing her neck publicly for one of the first times.

Chapman’s candid post followed an Instagram Live, which she uploaded on December 31. The video showed Chapman on the beach in Hawaii with her husband, Duane “Dog” Chapman, and their dogs. As she walked along the shore, Beth Chapman didn’t have anything covering her neck.

Fans were quick to notice that she wasn’t covering up, and many applauded her for being so vulnerable. While Beth Chapman will likely still be wearing necklaces and the like to cover up, she will hopefully become less self-conscious as time goes on. 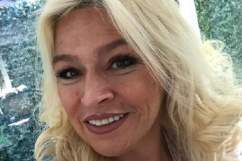