Just worked out next to @carrieunderwood NBD… she is adorable and so gracious… LOVE HER! #BelowDeck pic.twitter.com/scDPGudEe3

The photo above shows Carrie Underwood and Below Deck star, Adrienne Gang. The two women bumped into each other at a gym, and Gang shared a photo that she had someone take of her and the country star after their workout.

This picture is now being scrutinized. Here’s why.

In November, Underwood revealed that she fell on the front stairs of her home. Not only did she end up breaking her wrist in the fall, but she also hurt her face and needed surgery. In a recent post on her fan page, Underwood revealed that she needed 40-50 stitches in her face and that her facial injury was a lot more serious than she had initially let on.

Underwood went on to say that she is still healing now, about seven weeks after the fall. She told her fans that she “might look a bit different” following the accident.

“I honestly don’t know how things are going to end up but I do know this: I am grateful,” she adds. “I am grateful that it wasn’t much, much worse. And I am grateful for the people in my life that have been there every step of the way. I am determined to make 2018 amazing and I want to share things with you along the way. And when I am ready to get in front of a camera, I want you all to understand why I might look a bit different,” she wrote.

Fans have been frantically looking for pictures of Underwood, trying to see just how different the former American Idol star looks. Underwood has been very careful not to post any selfies on social media — and has only shared pictures from before her accident or photos in which her face is covered up. Just last week, for example, Underwood posted the following selfie. Notice how the majority of her face is covered by a scarf.

When in 5 degree weather, wrap your @caliabycarrie scarf around your neck and face…you keep warm AND look like an awesome winter snow ninja! #WinWin #StayThePath #LetItSnow #BabyItsColdOutside ❄️ ⛄️

The photo that was posted by Gang shows Underwood looking “normal.” Although she isn’t wearing much makeup in the pic, Underwood doesn’t appear to have any striking differences in her face. And, in case you were wondering if it was just a good angle, Gang tweeted about it, saying that she didn’t even know that Underwood had been previously injured.

“I had no clue she was injured,” Gang said in response to an article that was written about the country singer’s accident.

Below is a side-by-side of Underwood showing her in Gang’s photo (on the left), and in a professional photo taken before her accident (on the right). Can you see a difference in Underwood’s face? 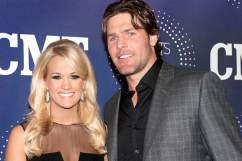