On Saturday, Dan Carlin announced that he was finally releasing a new Hardcore History podcast within the next 24 hours. But not everyone should listen to it, he warned. “This is a very dark and graphic episode” he tweeted. “Even 4 us.” He warned listeners that they should listen “with caution” because this newest one won’t be for everyone. And now the podcast is finally here. It’s called Painfotainment:

Ok,new show has been up on the website since early morning.I think we've got the feed working. Here's the new art: pic.twitter.com/KYi6FZcai8

Painfotainment is a Blitz episode (which means it’s just one episode rather than a series of episodes.) This one is about 4 1/2 hours long. The description reads: “Pain is at the root of most drama and entertainment. When does it get too real? This very disturbing and graphic show looks into some case studies and asks some deep questions. WARNING Very intense subject matter.”

Alright,sorry I've been AWOL(but you all know what I've been doing).Brain has been turned to mush-but the new HH should b out within 24hours

Now I know we've said this before, but this is a very dark and graphic episode(even 4 us). Listen with with caution! It's not for everyone!

Listeners on Reddit and Facebook were guessing about what the latest topic could possibly be before Carlin released the podcast. Some guesses included the Atlantic slave trade, the Sino-Japanese War, the road to Napoleon, the reconquest of Spain, the Spanish Inquisition, the Holocaust, the American Revolution, the Belgian Congo, Leopold II and the Congo, Vietnam, Vikings, East India Company, or the Dutch colonies. Here are just a few tweets and reactions to his announcement:

More graphic than Prophets of Doom?!

Carlin’s podcasts receive glowing reviews, with many people commenting that he’s one of the first people to make them interested in learning about history. Carlin started out as a TV news report in the 1980s and 1990s, a columnist, and a radio talk show host. Each Hardcore History podcast talks about a specific moment in history — often a very, very dark one. He talked about the rise of Genghis Khan, which was not for the faint-hearted. He’s talked about the creation of the atomic bomb and more. Every podcast is incredibly captivating. And we can’t wait to find out what this newest one is going to be about. 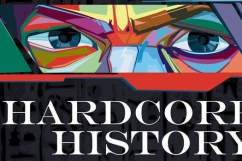