Getty Irish singer Dolores O'Riordan of Irish band The Cranberries performs on stage during the 23th edition of the Cognac Blues Passion festival in Cognac on July 07, 2016.

The lead singer of The Cranberries, Dolores O’Riordan, has unexpectedly passed away and cause of death details have not yet been released, according to BBC News. O’Riordan leaves behind a family with ex-husband Don Burton and thousands of saddened fans. According to a statement from O’Riordan’s publicist, “The lead singer with the Irish band The Cranberries was in London for a short recording session. No further details are available at this time. Family members are devastated to hear the breaking news and have requested privacy at this very difficult time.”

The Irish Mirror reports that O’Riordan and ex Burton married at Holycross Abbey, Tipperary in 1994 and their wedding reception was held at the Aherlow House Hotel. Get to know more about the ex-couple’s relationship, their family together and their unfortunate split. Read on below.

1. Together the Couple Had Three Children

GettySinger Dolores O’Riordan of the Irish rock band “The Cranberries” performs at the Sant Jordi Club in Barcelona on October 4, 2012.

During the course of their relationship, Burton and O’Riordan had three children together – son Taylor Baxter, daughter Molly Leigh and daughter Dakota Rain. Eldest child, Taylor, was born on November 23, 1997. In 2004, Telegraph reports that Burton and O’Riordan got into a legal battle with their son’s former nanny, which ended in their favor. Joy Fahy lost her lawsuit against the then-couple for false imprisonment and breach of contract.

According to The Peterborough Examiner, Don Burton also had a son named Don Jr. from a previous relationship. 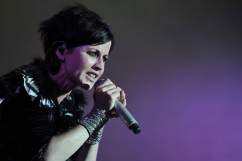 2. Burton Is a Former Tour Manager for the Band Duran Duran

We are crushed to hear the news about the passing of Dolores O’Riordan. Our thoughts go out to her family at this terrible time. https://t.co/6p20QD2Ii5 pic.twitter.com/vXscj0VGHS

Burton and O’Riordan reportedly met when The Cranberries and Duran Duran were on tour together, as Burton was Duran Duran’s tour manager. In response to the news of O’Riordan’s death, Duran Duran’s official Twitter account has tweeted their condolences in the above tweet.

3. The Couple Was Married for 20 Years

Over the course of 20 years together, Burton and O’Riordan owned several properties together, including Riversfield Stud Farm and properties in areas such as Dublin and Canada, according to The Irish News. The ex-couple sold their stud farm six years after purchasing it, sealing the deal in 2004.

While married, the couple would vacation in a log cabin in Buckhorn, Ontario, Canada, which is what ended up being the area that they later settled in on a more permanent basis. O’Riordan later returned to Ireland when her marriage fell apart.

4. O’Riordan Was Dealing With Her Failing Marriage When Arrested After an Alleged Air Rage Incident

GettyDolores O’Riordan from The Cranberries performs during F1 Rocks! Melbourne at Sidney Myer Music Bowl on March 17, 2012 in Melbourne, Australia.

In 2014, O’Riordan was arrested after a flight reported her to be violent and unruly onboard, according to Express UK. At the time, O’Riordan’s mother Eileen said that her daughter was having a difficulty time coping with her split from longtime husband Don Burton. After her daughter’s arrest, The Irish Mirror reported Eileen’s take on the situation. Eileen O’Riordan said, “She is going through a marriage separation at the moment. That’s hard for anyone.”

O’Riordan’s mother said that her daughter hadn’t been sleeping well and she had been worried about her health. She said she had a feeling something would happen, but hoped Dolores would be able to deal with her struggles over her broken relationship with Burton.

5. Her Children Were Living With Burton When They Separated

When O’Riordan dealt with her alleged airplane issues and was arrested, her mother revealed to The Irish Mirror that O’Riordan’s kids were with their father in Canada. She explained, “They just know that mommy isn’t well at the moment.”

Read More
Celebrities
The late Dolores O'Riordan was previously married to ex-husband Don Burton. Get to know more about their marriage and three kids, who O'Riordan leaves behind.