Well, it was only a matter of time. Fire and Fury: Inside the Trump White House, the best-selling book by Michael Wolff, is now set to be adapted for television. Hollywood Reporter broke the news Wednesday afternoon, reporting that Endeavor Content had purchased the rights to the book that literally everyone has been talking about for the past two weeks for somewhere that is “said to be in the seven-figure range.” Endeavor Content was formed in October of 2017 by William Morris Endeavor and IMG. Their deal to acquire the Wolff book marks their largest deal made during their short existence.

Wolff’s book, which was pre-empted by leaks and excerpts, was scheduled to be published on January 9, but that date was changed to January 5 in an effort to thwart the White House’s attempt to block it’s publication. President Trump has been relentless in his attacks on the book and it’s author, while quotes from former White House advisor Steve Bannon about the president and his family, helped play a part in his recent ouster from the conservative website Breitbart News. 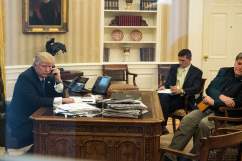 Fire and Fury debuted at number one on The New York Times best-seller list. The book’s publisher has said it has gone on to be their biggest seller with over 1.4 million copies ordered. Book stores across the country quickly sold out and according to The Hollywood Reporter, the book has been “sold in 32 countries” and is “currently the best-selling book of any genre world-wide.”

Wolff will serve as the adaption’s executive producer. British television producer Michael Jackson, who has worked at the BBC and Channel 4 in England, will also be involved, serving as a producer.

It is too early to tell where the series might end up and how it will end up coming together. Will it be a mini-series, a limited series or series that runs for a couple of seasons? I personally love a good limited series, so that is what’s getting my vote. Although if HBO wants to make it a movie, something on par with Game Change, which was about the rise of Sarah Palin during the 2008 presidential election, I could also get behind that. I’m not sure anyone is really on board with a multi-season show. We have that. It’s called cable news.

It is also too early to associate any names with the project, but it’s not too early to make some educated guesses on who could get cast to play some of the book’s key players, people like Trump and Bannon, as well as Jared Kushner, Ivanka Trump, General John Kelly and others. The show could tap some of  Saturday Night Live’s cast to fill roles, especially Aidy Bryant to play Sarah Huckabee Sanders, Kate McKinnon to pull double duty and play both Jeff Sessions and Kellyanne Conway and Cecily Strong to play First Lady Melania Trump. Mikey Day and Alex Moffat could be brought on to play Donald Trump Jr. and Eric Trump, although you’d have to think that no one in the Trump family would be too happy about that. Is Melissa McCarthy down to play Sean Spicer again? Please.