Countdown to Christmas may be over, but Hallmark’s delightful romantic movies aren’t. Tonight, Hallmark is premieres the second of its Winterfest movies with Frozen in Love. Tonight’s movie premieres at 9 p.m. Eastern (8 p.m. Central) on Saturday, January 13, 2018. The movie stars Rachael Leigh Cook and Niall Matter. After you read all about this movie and watch it, come back and share any comments or questions that you may have about the movie in our comments section below. Join in the discussion with other readers.

Here’s the synopsis for the movie from Hallmark: “Mary faces the grim reality of her quaint but stagnant Denver store closing, she reaches out for some PR help to turn things around. At the same time, the handsomely wild, flashy “live-in-the-moment” Denver Royals hockey star Adam is sent to the same PR firm to fix his reputation, and the two are paired together in a seemingly mutually-beneficial buddy system: repair his image and give her the chance to reinvent the store and do something big to save it.”

Hallmark also offered this synopsis: “When struggling bookstore owner Mary and the bad boy of professional hockey, Adam, are teamed together to help facilitate an image makeover for the other, they soon realize that opposites attract and they find themselves unexpectedly frozen in love.”

Rachael Leigh Cook stars as Mary Cartwright. Cook is a favorite in Hallmark movies, starring in the popular series Summer in the Vineyard and Autumn in the Vineyard. Her many other credits include She’s All That, A Midsummer Night’s Dream, Josie and the Pussycats, All I Wanna Do, Blow Dry, House of Yes, Living Out Loud, Get Carter, The Big Empty, Into the West, Psych, Perception, and more. She lives in LA with her husband, Daniel Gillies, and three-year-old daughter Charlotte and two-year-old son Theo.

Niall Matter stars as Adam Clayborn. He was recently in the Hallmark movie Stop the Wedding and the Christmas movie Engaging Father Christmas. He also wrapped up a supporting role in The Predator. His other credits include The Best Years, Eureka (Zane Donovan), Primeval: New World, The Good Doctor, Constantine, Supernatural, iZombie, Guilt by Association, Remedy, Watchmen, Melrose Place, 90210, and more. 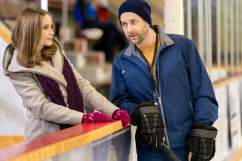 Where Was Hallmark’s ‘Frozen in Love’ Filmed? Was It Really in Denver? 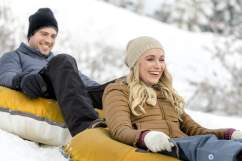 Read More
Hallmark, TV
Tonight Hallmark's Winterfest movie Frozen in Love premieres. Learn all about how to watch it, the cast, see photos, and then discuss it with other fans.