Maybe you’re still missing Hallmark’s Countdown to Christmas, but you can find comfort in their wonderfully romantic winter movies. Tonight, Hallmark is premieres the third of its Winterfest movies with One Winter Weekend. Tonight’s movie premieres at 9 p.m. Eastern (8 p.m. Central) on Saturday, January 20, 2018. The movie stars Taylor Cole and Jack Turner. After you read all about this movie and watch it, come back and share any comments or questions that you may have about the movie in our comments section below. Join in the discussion with other readers.

Here’s the synopsis for the movie from Hallmark: “Cara, a women’s magazine writer who gets burned by her boyfriend on New Years’ Eve, decides to go on a dating detox. Challenged by her employer to write about it, she hopes a spontaneous ski getaway with her best friend will spark inspiration. Complicating matters, they discover they’ve double booked their chalet with two eligible men, including Ben, an entrepreneur. When the share-mates get snowed in, Cara and Ben are thrown together.”

Hallmark also offered this synopsis: “A relationship writer at a women’’s magazine has recently sworn off dating and joins her best girlfriend for a snowboarding weekend. A reservation snafu forces them to share a chalet with a couple of guys’ they’ve never met, one of whom is a company CEO who is also lying low on the dating front. However, once he and she get to know one another better, they begin to wonder if perhaps they should rethink their whole “non-dating” status.”

Taylor Cole stars as Cara. She most recently starred in Winter Festival of Ice for Hallmark and was a series regular on CW’s The Originals. She’s starred in many Hallmark movies, including The Art of Us, Christmas in Homestead, My Summer Prince,  and Appetite for Love. Her credits outside of Hallmark include Impastor, Supernatural, The Glades, CSI Miami, The Event, Bad Blood, The Surrogates, All You’ve Got, Summerland, Heroes, Secret Girlfriend, Ballers, Castle, Two and a Half Men, Entourage, NCIS, Melrose Place, and more.

Jack Turner stars as Ben. He worked for Google for five years and now focuses on acting and music. His credits include The 10 Year Plan, My Summer Prince, Stitchers, D.C. Legends of Tomorrow, Fatherly Obsession, Nosferatu, and more.

Rukiya Bernard stars as Megan. Her other credits include Van Helsing, Stagers, Christmas in Evergreen, Debbie Macomber’s Dashing Through the Snow, The Gourmet Detective, Ungodly Acts, Accidental Obsession, Just the Way You Are, Supernatural, Proof, Intruders, Witches of East End, R.L. Stine’s Haunting Hour, Wonder, The Cabin in the Woods, Tooth Fair, The Day the Earth Stood Still, and more.

Dewshane Williams stars as Sean. His many other credits include Baxter, Lost Girl, Being Erica, Saving Hope, Flashpoint, Nikita, The Strain, Backstage, Defiance, Supergirl, The Expanse, Salvation, Ransom, Beauty and the Beast, Killjoys, Murdoch Mysteries, Dog Pound, Home Again, The Story of Luke, Lullaby for PI, Jesus Henry Christ, Unless, and had the lead in the musical Grease. 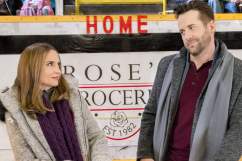