Hoda Kotb has an estimated net worth of $12 million, according to Celebrity Net Worth. Meanwhile, The Richest estimates her net worth to be around $4 million.

Although she was born in Oklahoma, Kotb spent the majority of her childhood in West Virginia. She obtained her degree in broadcast journalism from Virginia Tech and has been working in the entertainment/news industry for nearly three decades.

On January 2, 2018, Kotb was named the co-anchor of Today, officially replacing Matt Lauer. Kotb will be joining Savannah Guthrie at the anchor desk for the first two hours of the NBC morning talk show. Kotb will still co-host the show’s fourth hour with her good pal, Kathie Lee Gifford.

1. Kotb’s Net Worth Is Expected to Increase Now That She Has Joined Today

Kotb was announced as Guthrie’s co-host on the first airing of Today in 2018. After spending the past few weeks filling in for Matt Lauer, Kotb reached a deal with NBC that will see her on the air for two additional hours each day.

“It’s 2018 and we are kicking off the year right because Hoda is officially the co-anchor of Today. This has to be the most popular decision NBC News have ever made and I’m so thrilled,” Guthrie announced on Tuesday morning.

Kotb’s annual salary was estimated at $2 million before she agreed to co-host Today with Guthrie. Former Today staple Matt Lauer had been the highest paid anchor on NBC, making between $20 and $25 million, according to Babble.

While it seems clear that Kotb wasn’t offered a salary quite that high, she is expected to bring home a bigger paycheck with the new gig. Details of her salary have not been made public.

2. She Is a Correspondent for Dateline NBC, Had a Show on SiriusXM & Has Done Some Acting

Kotb earns money from various jobs. Not only does she earn a salary from Today, but she also received a paycheck for her work on Dateline NBC. Additionally, she had her own show on SiriusXM, and has done some work in television as an actress.

The veteran journalist got her start with CBS in Egypt, where she worked as an assistant. From there, Kotb worked for various networks before landing a gig with Dateline NBC in 2002.

“She worked for three years from 1986 to 1989 as a Morning Anchor for an ABC station in Illinois. For two years she reported and was anchor on the weekends in Fort Myers, Florida for WINK-TV. She worked as an anchor from 1992 to 1998 WWL-TV in New Orleans, Louisiana,” reports The Richest.

In 2010, Kotb won a News & Documentary Emmy for her coverage of “Miracle on the Hudson.” In 2006, she won a Peabody Award for her work on the hour-long documentary “The Education of Ms. Groves.” Kotb still works as a correspondent for Dateline.

In 2015, she landed her own radio show on SiriusXM.

“On her new show, The Hoda Show, Kotb will discuss some of her favorite ‘water cooler’ topics, including the latest on her favorite TV shows, dating, health and beauty. Kotb will share personal anecdotes, take calls from SiriusXM listeners and speak with some of her favorite celebrity guests. ‘I am so excited to peel off my Spanx®, wipe the shellac we call makeup off my face, get in my fat pants, and…gab on my new SiriusXM show,’ said Hoda Kotb. ‘Let’s let it all hang out!'”

Kotb has also tried her hand at acting, most recently starring as herself in the popular series Girlfriends’ Guide to Divorce.

3. She Owns a Home in New York

Just about everyone knows that real estate in New York is expensive. The closer you are to the city, the more money you will shell out to live. In 2010, The New York Post reported that Kotb purchased a home in Hell’s Kitchen, moving from Manhattan’s Upper West Side.

A few years later, Kotb moved into an apartment with her boyfriend, Joel Schiffman.

“Joel and I are getting an apartment together, so we went to see it with the measuring tape. It’s a little weird to be in your 50s and we’re like ‘Hey, we’re moving in!’ It’s like you’re kids. It’s so weird. I was afraid to tell my own mother that I was moving in with my boyfriend. I was afraid. I don’t know. I know it sounds weird—I’ve been married. It’s like, ‘Whatever!’ But it’s weird. It’s a little odd,” Kotb said on The Hoda Show, which airs on SiriusXM.

4. Her Books Are Best-Sellers

Kotb is also an established author, and has earned money from the books that she has written. In 2010, Kotb released her New York Times Best-Selling autobiography, Hoda: How I survived War Zone, Bad Hair, Cancer, and Kathie Lee.

Three years later, Kotb published Ten Years Later: Six People Who Faced Adversity and Transformed Their Lives, in which she wrote about six people who persevered when “faced with impossibly challenging or tragic life situations.”

In 2016, Kotb released her third book called Where We Belong: Journeys That Show Us The Way, which was another non-fiction book about people’s inspiring stories.

Kotb has already penned her fourth book, which is slated for release this year. Kotb decided to try something a little bit different this time, taking a shot at a children’s book called I’ve Loved You Since Forever. The book was inspired by Kotb’s daughter, Haley Joy, whom she adopted in February 2017. The book will be released on March 6, 2018, and is currently available for pre-order for $18.99 on Amazon.

“I can’t contain myself, she is everything…she’s everything,” Kotb told E! News in October.

Below is a photo of Kotb with her daughter.

Kotb has been dating her financier boyfriend, Joel Schiffman, for over four years.

Schiffman is the Vice President & Director of Financial Institutions at Janus Capital Group, according to his LinkedIn profile. He has worked for the company since 2015, but has held a job in the finance sector since the late 80s.

According to his LinkedIn profile, he has a great deal of experience in his field. 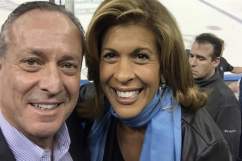