The latest entry in the Insidious is set to release tonight and deliver a plethora of jump scares to theatergoers. Running an hour and forty minutes, Insidious: The Last Key follows paranormal investigator and psychic Elise Reinier once again. Set after the events of Insidious: Chapter 3 but before the events of the original Insidious, this movie aims to fill in some of the plotholes.

Unlike other modern horror films, there is no post-credits scene in Insidious: The Last Key.

Feel free to leave the theater after the movie ends, as this film won’t have any extra secrets lying in wait for devoted fans. This is rather surprising since other horror films have had some success with adding teasers at the end of their movies. Even IT had a small stinger of Pennywise laughing once the credits finished rolling.

(Warning: Spoilers for the other three Insidious films below)

Currently, Insidious: The Last Key sits at a 23% on Rotten Tomatoes with 30 reviews from critics. This makes it the lowest rated film in the series with the original Insidious taking the top spot with a 62% rating from critics. Many critics cite the lackluster scares and sense of familiarity as major issues with the film. Others point out that since Elise and the other main characters’ fates are already determined it saps The Last Key of any real tension or menace. This is a product of the franchises chronological order that sees Elise die in the original Insidious, however, both Chapter 3 and The Last Key take place before this happens.

For the unfamiliar, the original Insidious introduced Elise as a paranormal investigator who came to a family’s home in the hope that she could save their son. While she did succeed, Elise was killed at the end of the movie by a spirit. Elise then appeared in the second film as both a ghost and when she was younger during a seance. As for Chapter 3 and 4, Elise is slightly younger since the films follow her coming out of retirement. Additionally, the Insidious series also has some reoccurring antagonists that have appeared throughout the other films. These include the bride in black spirit and the red-faced demon that has become an iconic mascot for the franchise.

Viewers should expect both of these beings to make an appearance in The Last Key since they are directly connected to Elise. The bride in black – aka Parker Crane – was originally banished by Elise in 1986 and vowed to kill her. As for the red-faced demon, he was the main villain in the original Insidious and had a brief appearance at the end of Insidious: Chapter 3. We know he will be in The Last Key since a few of the brief teaser trailers have shown him crawling behind Elise. It’s possible we may finally get an explanation of this creature’s origins since this is quite possibly the last film in the series.

Insidious: The Last Key is shaping up to be the first big horror movie of 2018, despite the poor critical reviews. Whether it will make enough to justify more films set in this universe is yet to be seen. 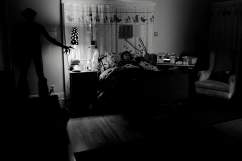