Lady Gaga is one of tonight’s performers at the 2018 Grammy Awards and she is also a nominee. Gaga is nominated in the best pop solo performance and best pop vocal categories. And, in preparation for tonight’s big performance, Gaga wrote on her Instagram account that, “I’m so honored to be singing from #Joanne, this album and moment with little monsters means so much to me.” For her Grammy Awards outfit, Gaga is rocking a huge train and fans are hoping she will be enjoying the Grammy Awards with her boyfriend Christian Carino in tow. Check out a photo of Gaga before she headed out to the Grammys tonight in the below photo.

Prior to tonight’s event, Gaga was spotted out on a date night with boyfriend Christian Carino, according to People, doing a little celebrating early. Carino, 48, works as a CAA (Creative Artists Agency) talent agent and some of his client list includes celebrities Justin Bieber, Simon Cowell, Christina Aguilera, Miley Cyrus and Jennifer Lopez. In fact, Entertainment Tonight reported that Carino is actually Gaga’s talent agent as well. And, he was photographed at her side when she took on last year’s Super Bowl halftime set.

Previously, Carino was dating The Walking Dead star Lauren Cohan, according to E! News. Lady Gaga previously dated and was engaged to longtime fiance, actor Taylor Kinney and her relationship with Carino is the first reported romantic relationship for Gaga since her split from Kinney. Carino and Gaga have reportedly been dating for over a year.

Recently, Gaga inked herself a deal for a Las Vegas residence, so that’s definitely something to celebrate, according to MGM. In announcing the news, MGM released this official statement, “Six-time GRAMMY Award-winner, Golden Globe Award-winner and Academy Award-nominee superstar entertainer Lady Gaga will bring her one-of-a-kind talent and creativity to the stage at Park Theater at Park MGM in Las Vegas beginning in December 2018. On the heels of a year that included a stunning Super Bowl performance and a wildly celebrated sold-out tour, Lady Gaga’s energy and raw talent will forever change the Las Vegas entertainment landscape. With a show designed specifically for this intimate venue, Lady Gaga will launch a two-year, multi-date love affair with Las Vegas.”

Thank you Richard, Bill and Chris for making my dream come true! I was made for this town, and I can’t wait to light up the Park Theater like never before! ?

Variety reports that Gaga’s Vegas deal is worth up to $100 million and includes at least 74 performance dates. And, Gaga’s man reportedly helped negotiate the terms of the contract, with the help of attorney Kenny Meiselas of Grubman Shire Meiselas & Sacks with Sonya Guardo. On December 19, 2017, Gaga posted her excitement over the deal on her Twitter account by tweeting, “The rumors are true! I will have my own residency at MGM’s Park Theater. Get ready for a brand new show!! It’s been my lifelong dream to be a Las Vegas girl, I’m so overjoyed! LOVE YOU LITTLE MONSTERS WE DID IT, MEET ME IN Las Vegas!! #LasVegasGoesGaga.”

According to The Guardian, Gaga’s official statement about the major opportunity was, “It has been a lifelong dream of mine to play Las Vegas … I’ll leave my heart on the stage every single night.”

Lady Gaga and her boyfriend Christian Carino out and about in New York City tonight. pic.twitter.com/HjqsQs2fMm 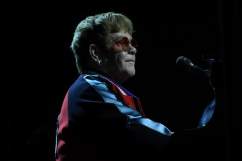 Miley Cyrus & Elton John Get Together for 2018 Grammys Performance