According to WhosDatedWho, Luke Evans has been dating his boyfriend, Jon Kortajarena, since 2014, but Just Jared reported that the couple dated a few years back, but called it quits at some point. On the other hand, Just Jared also has reported that they may be back together. In Spring 2017, Kortajarena posted, and then deleted, some photos on Instagram from his recent trip to Budapest, where Evans has been filming. Evans also posted a photo from his birthday and gave a shout out to a mystery person, writing, “What an amazing bunch of people. Thank you for an amazing birthday. Just missing one special someone … you know who you are.” Perhaps he was talking about Kortajarena. Earn the Necklace reported that Evans later revised the caption on his birthday photo, simply writing, “What an amazing bunch of people.” See a photo of Kortajarena below.

Throughout his career, Evans has been openly gay, explaining to TIME in 2002 that, “Everybody knew me as a gay man, and in my life in London I never tried to hide it … I don’t think I’d be in this business if I felt that I was not being employed because of who I am in my personal life. I don’t know how ‘Hollywood’, as you call it, thinks … I don’t feel they’re connected. Talent, success, what you do in your personal life – I don’t see how one should have an effect on the other. If I’m going to be a poor man at 60, then at least I’ve lived a happy, open, gay life and not had to hide it from anybody.”

Though Evans has been transparent about his sexuality, he also previously told The Jackal that he likes to keep his personal life private. He explained, “I try to keep my personal life and my private life separate. “Not for any reason other than there’s a clue in the title—it’s private. As an actor you have to keep some sort of enigma and mystery. There’s a dignity to keeping private. I’m trying to keep a bit of dignity to my private life and to protect the people in my life … It’s the choice I’ve made.”

As for Jon Kortajarena, he also works in entertainment. According to Out, Kortajarena is a Spanish model and actor, known for A Single Man and Quantico. In the past, Evans has also been linked to a woman named Holly Goodchild.

In 2016, Evans told Mr. Porter that he was single, according to Bustle. Evans said that he was using his single status for, “finding contentment with myself, and not relying on anybody else to validate it … I think being an only child has hindered that slightly because I’ve always wanted to be around other people.” He also, again, stressed the importance of keeping his personal life out of the spotlight.

Currently, Evans stars on the period drama The Alienist, which also stars Dakota Fanning as the first female member of the New York Police Department. On the show, Evans’ character is an illustrator, who often enjoys the company of prostitutes. New episodes of the show air Monday nights on TNT at 9 p.m. ET/PT. 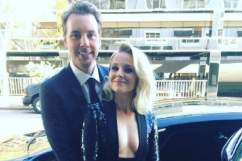