CW The Wicked and the Divine Recap

Tonight’s latest episode of Riverdale, “The Wicked and the Divine,” had a lot of elements that fans loved, and some elements that left them rolling their eyes a little. But some plots that had fans shaking their heads were finally resolved. And fans were left with a classic cliffhanger that will have them tuning in right away when next week’s episode airs. Read on for a recap and review of tonight’s episode, featuring some of the best memes from fans around the country. This post has spoilers for the latest episode of Riverdale.

In true Riverdale fashion, the episode started out with Veronica getting ready for the fanciest confirmation I’ve ever seen. (I was confirmed in the Lutheran church and it was nothing like that. No pop song solos and super fancy dresses or poker nights the night before for us.) This was a true Lodge confirmation, complete with “chic formal” dress and a modern rendition of Sweet Dreams. (Which seems odd for a Catholic church setting, but then again this is the same town where they sang “The Union of the Snake” at the town festival while everyone was on edge about the Serpents.)

But fans are especially raving about the look Archie gave Veronica when he saw her in that dress. Were those wedding bells he was hearing when he saw his girlfriend looking stunning in a white dress?

The look Archie gave Veronica when he saw her in that dress. That‘s like the look of a man seeing his girlfriend in a wedding dress. Archie is so in love with her.#Varchie #Riverdale pic.twitter.com/e7Z9Sgl8nt

We saw Archie finally make the right decision about the FBI agent, by not betraying Veronica and Hiram. (Personally, I’m buying into the theory that the guy isn’t an FBI agent at all, but is working for a company that is a rival to the Lodges.) I’m glad we didn’t go down the trope where Archie betrays everyone because he was too gullible.

When you just want to get burgers from Pop’s for your girlfriend’s crime boss father but the FBI agent in your phone keeps texting you to hang out. #Riverdale pic.twitter.com/66tP8dvMHO

But could Archie be heading to the dark side himself?

Not that Archie’s reveal about Hiram was very shocking…

Fans have a lot of theories about that FBI agent, by the way. Despite his “I’m trying to be Agent Cooper Light” attitude, he’s not who he appears. First off, roping in a minor without talking to his dad has all sorts of legal issues surrounding it. And second, he just seems sketchy. There’s no way he’s the real deal. I mean, he was following Archie all this time and didn’t care about the Black Hood at all? I’m not buying it.

Ok, I'm starting to think "Agent Adams" isn't even with the FBI. I think he's just some dude who saw that paparazzi pic of Archie from the pilot episode and is now just stalking him. #IWontBeIgnoredArchie #Riverdale

And how about Archie recognizing who Hiram is, but basically saving his life anyway? I also liked how Hiram stepped in and defended Pop. No one needs to be disrespecting Pop.

FP and Jughead are finally on the same side again. I felt so bad for Jughead when everyone was turning against him and he was almost kicked out of the Serpents. Yes, he’s been a little hotheaded lately and a little overly passionate about a group that he just joined. And yes, that article he wrote did more damage than good. But he’s just a teenager and he’s figuring out his place in the world. He’ll learn how to channel that passion more productively to help people down the line. I’m just glad that his dad is back on his side.

He’s only trying to protect their own. #Riverdale pic.twitter.com/C82kehhbue

On a side note, FP might have the best face palm since Jean Luc Picard:

And it’s a good thing Penny and Tall Boy have been put in their place finally. Tall Boy was starting to get on my nerves. I’m guessing he’s not The Black Hood though.

Tall Boy did it? And told Penny to come back ? #Riverdale pic.twitter.com/VZHfYQJsTK

And of course, we can’t forget that Jughead and Betty are officially Bughead again, and it looks like they’re going to stay that way this time. They’re definitely endgame on this show, and fans love it. Not that all their problems are solved — not by a long shot. Betty’s still being dishonest about some things, and we’ve got that whole weird Dark Betty storyline going on. But she and Jughead are mending their relationship, and they can probably work through her issues too. And Jughead and Betty are back to being the best investigators in this town, solving issues the police can’t because they have their own dark agenda.

#Riverdale Jughead feeling a disturbance in the force pic.twitter.com/EdMlb5eTw9

(Not that some fans are very interested in solving that murder at the moment.)

And then there was that ending. What on earth happened? Someone really sketchy showed up at the Coopers’ house (as if Chic hasn’t been sketchy enough already) and now that person’s dead. Did Chic kill him? Or maybe Alice? We know it wasn’t “Dark Betty,” so at least there’s that.

This twist at the end of the episode was nicely done. No one was expecting it. Personally, I was thinking that FP would be at the door after dealing with Tall Boy, wanting to talk about children drama with Alice. (OK, maybe that’s not a good enough reason to drop by, but I was expecting he’d be at the door for some reason.) And then he’d look over and see Chic and wonder if that was his son. (This is my current theory to explain why Hal hates Chic so much.) But my prediction was completely off.

I was just celebrating about #bughead and then I look up and a man is dead #riverdale pic.twitter.com/IMwIymkHfN

So it looks like this show is going to take a dark turn again next week (no “Dark Betty” pun intended.) Now that some secrets have been revealed, will we be piling on all new secrets all over again? 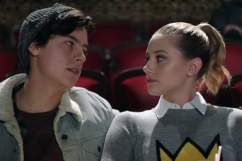