In Season 1 Episode 11 of Star Trek: Discovery, aptly called The Wolf Within, we finally get to see the Faceless Emperor. Some fans might not have caught on immediately as to who the emperor is, so we have all the details below. This post has major spoilers, so don’t read on unless you’ve already seen the episode.

It was revealed at the very end of tonight’s episode that the Emperor is Philippa Georgiou. Yes, the Emperor is the captain that Michael mutinied against, and now it looks like she’ll be betraying her all over again. (By the way, did you notice how Lorca bowed quickly to the Emperor, much sooner than Michael did?)

Of course, this was just one of the crazy reveals from tonight’s episode. We learned about Ash’s true identity too, and it was heartbreaking…but also incredibly compelling, with top-notch acting selling every single part of that reveal.

As for Emperor Georgiou, it’s going to be interesting to see what happens next with her character. Her counterpart, in the “real” universe, was born in Malaysia and graduated from Starfleet Academy, where she became one of Starfleet’s most decorated officers. She was captain of the USS Shenzou, and they came in contact with the Klingons during a routine inspection of an interstellar relay. This led to the Battle of the Binary Stars, which started the Klingon-Federation war. Georgiou was killed by T’Kuvma while she tried to capture him on the bridge. Michael then killed T’Kuvma in front of Voq. 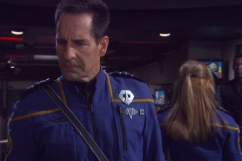 ‘In a Mirror Darkly’: How to Watch the Enterprise Episodes for Free